What could a college football Super League look like? 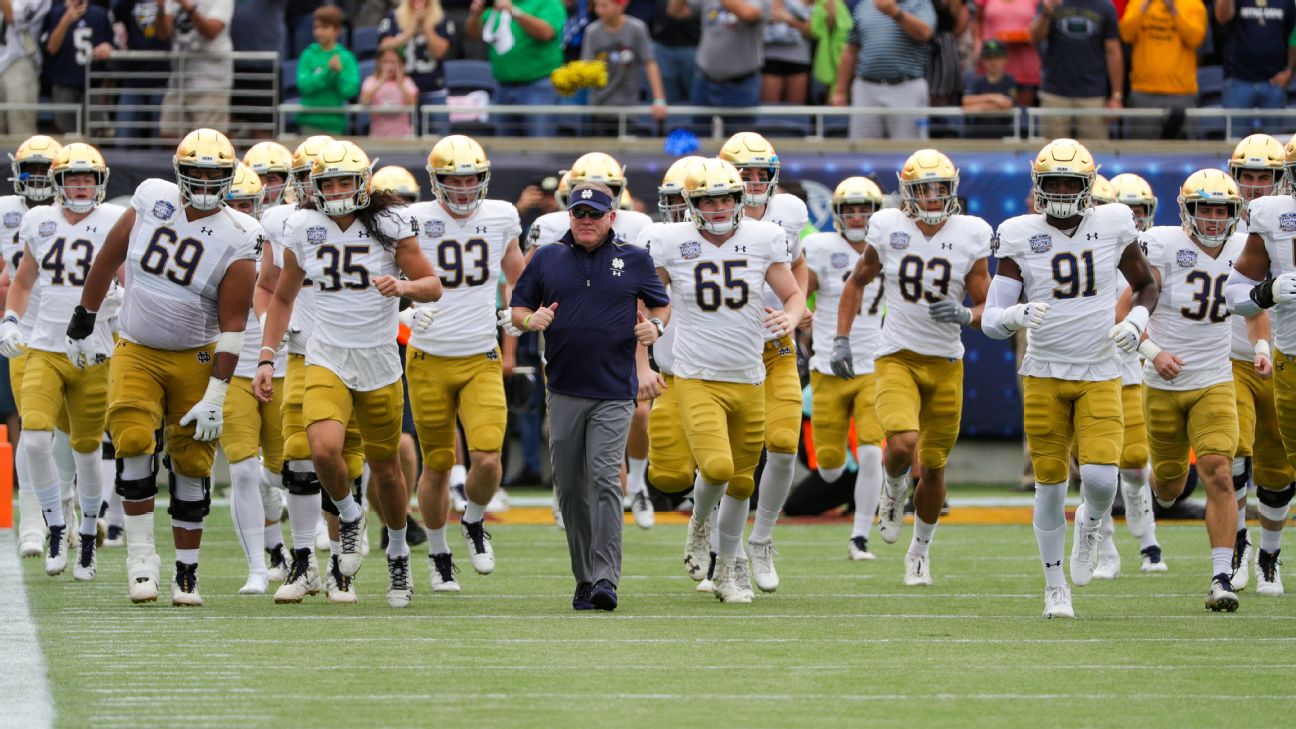 As the globe comes to terms with the inevitably of a Super League upending the structure of European soccer, it's not hard to imagine a series of events that leads to a similar shift in an American sport similarly steeped in more than a century's worth of tradition. With its best teams spread mostly among five regional conferences -- all fighting for independent television contracts -- college football lends itself to the idea of a Super League in the same way.

The concept is easy to understand: If all the best teams play in the same league, that league would generate more money for those teams than they would earn in their current leagues. And the reception it would receive would be similar to how things have played out across the pond this week: The overwhelming majority of people invested in the sport would probably hate it.


With billions of dollars at stake, however, and plenty of conference realignment shenanigans in the not-so-distance past, no one can say with complete certainty that a college football Super League will never be hatched.

If it were to happen and it mirrored something similar to what is being proposed in Europe, what would it look like? Our reporters weigh in, using their own criteria.

Close your eyes and think about the biggest brands in college football. Now come up with your list, forgetting about recent conference or national championships. For this exercise and this exercise alone, the biggest criteria is the brand. That is why Miami is included in my list. The Hurricanes have not won a national championship in 20 years, but they have one of the most recognizable brands in football. Say the U, and everybody knows exactly what you mean.

The same goes for Michigan, which like Miami has not made it into the College Football Playoff and has an even longer national championship drought than the Hurricanes. But say GO BLUE and everybody knows you are referring to the team in Ann Arbor.

With this baseline alone, I came up with my 15 teams in about two minutes' time, without much in the way to deter me. Are there other teams that are qualified? Sure. You could argue UCF has done more than Miami over the past 5 years and should be included, but this exercise has to look beyond a five-year period. You could make a case for Oregon, too, but again -- Miami and Michigan win on branding 10 times out of 10. I feel fairly confident more college football fans would tune in to watch Miami-Notre Dame, for example, as opposed to Oregon-Notre Dame. (No offense, Ducks)

From there, the teams almost pick themselves, as the selection criteria essentially mimics the old program prestige ratings in the EA Sports NCAA football series. It's a combination of the teams that have experienced the most success over the past 15 years or so with their ability to generate maximum revenue.

The way soccer's Super League is taking shape, 12 Big Brands joined forces, and they're keeping the door open for three permanent members. There are two other giant brands out there (Bayern Munich and Paris Saint-Germain), but there's a chance that at least one last spot basically goes to the most desperate, highest bidder.

With that in mind, here are my initial 13:

This list includes every national champion of the last 19 years and basically all the primary football brands that get the special Jordan Brand stuff and whatnot. And USC needs a dance partner out west, so it gets to include the Bruins.

The next question is, who's the most desperate to become No. 14 and 15 from a pool of teams like Miami, Nebraska, Penn State, Tennessee, Texas A&M and maybe Oregon or Washington? They don't have to actually be good at the moment -- they just have to be marketable, and they have to have been great at some point. College football has lots and lots of Arsenals to choose from.

My guess: Texas A&M and Penn State. Tennessee and Nebraska could obviously pony up plenty of desperate cash, and Oregon's got Nike money, but money plus any sort of recent cachet makes me think it's the Aggies and Nittany Lions.

To Kyle's point, there's definitely going to be one league that claims the moral high ground here and refuses to participate. That league will undoubtedly be the Big Ten. I can just picture Jim Harbaugh's news conference in which he explains how virtuous Michigan is, and how it refuses to concede on grades or admissions just to join this league. Sure, it means the Wolverines will fall further behind on a national scale, but that's the price to be paid for having a moral compass. And yes, the Big Ten will change its mind and decide it wants to join two months after the league's season starts.

The politics of this league must also be at the forefront. This isn't about better competition or rewarding the best of the best. This is about big, powerful, rich people in gaudy suits with fancy cars making arbitrary decisions that cascade outward and ruin everything around them. So, Texas is in.

It might seem reasonable to include Clemson, as the Tigers have made the College Football Playoff six straight years. But Dabo Swinney would sooner quit and join the NFL than concede to this mocking of the collegiate model. Amateurism still matters to some people.

UCF will not be invited, but it will hold a parade announcing its own, separate super league.

Then, of course, there are the designated punching bags -- the programs that will be just fine losing game after game in exchange for a seat at the cool kids table. Welcome Nebraska and Tennessee.

Initially, I was inclined to take two teams from each Power 5 school and from the Group of 5s and independents. But much like the College Football Playoff, we're going with the big names only, because that appears to be what the soccer folks did.

My selections are strictly teams that have won titles in the last two decades and the popular brands. The "brands" that I'm selecting have fan bases with just as much -- if not more -- sidewalk alumni than actual alumni.

And make no mistake about it, that's not a dig at sidewalk alumni as much as it is a compliment to how highly people have to think of a football program to claim it without any actual ties.

Miami and Oregon are probably the two schools who don't fit the criteria above the most on my list, but they're also objectively cooler than whatever other school you think could replace them. I will not apologize for being honest.

Soccer's Super League is all about big brands. I'm all about actual performance, especially when it ticks off the big college football brands in the process. In the immortal words of former Oregon and Florida State coach Willie Taggart (who ironically did very little at those two schools), you've got to #DoSomething to make this league. Oregon and Florida State, by the way, both have accomplished enough to make the list of 15.

Criteria? To me, it's simple. Any national champion or runner-up from the past decade is in. No small brands are reaching college football's biggest stage. That gives us nine teams: Alabama, Clemson, Ohio State, LSU, Georgia, Auburn, Notre Dame, Oregon and Florida State. The next marker is multiple Power 5 conference titles -- plus at least one CFP appearance -- during the CFP era. Hello, Oklahoma and Washington.

Four spots remain. Here's where brand power factors in more. Florida hasn't made a CFP appearance but boasts four division titles and five AP top-15 finishes since 2012. Chomp, they're in. Penn State stunningly won the Big Ten in 2016, setting off a 42-11 run over four seasons that included three AP top 10 finishes. We Are ... in.

USC has had a forgettable decade, replete with horrible hiring decisions. But the Trojans at least have a Pac-12 title in 2017 and two other division titles since 2015. That's more than Michigan or Texas A&M can celebrate. Fight on.

The last spot reluctantly goes to Texas, which, like Michigan, has perfected the mega brand, minor results thing lately but at least made the Big 12 championship game in 2018. The Longhorns also ensure all the power conferences have multiple representatives.