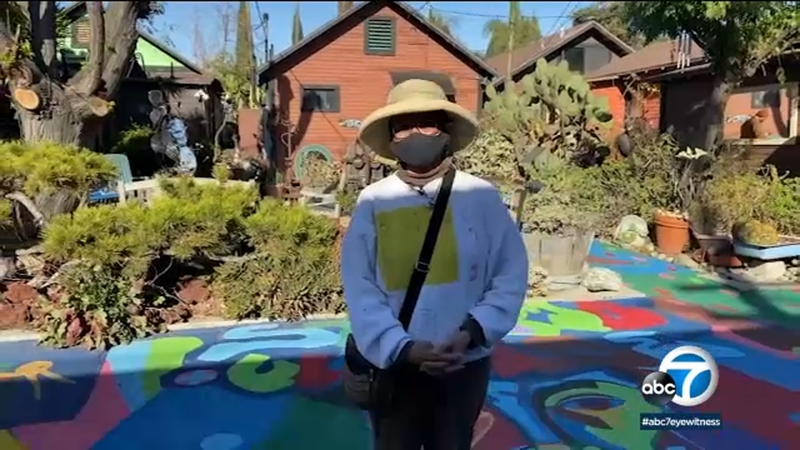 St. Elmo Village in Mid-City was birthplace of BLM movement

St. Elmo Village is a hidden treasure named after the Mid-City street where it's located.

"We are a community center. We're an art center. We do free workshops," said Jacqueline Alexander-Sykes, director and administrator of St. Elmo Village.

From the vibrant mural that covers the ground, to green spaces, and art at every turn -- it is rich with life. Alexander-Sykes's husband, Roderick Sykes, and his uncle, Rozelle Sykes, a pair of creative and free-spirited visual artists, lived there in the 60s.

"They started fixing it up and cleaning it up and inviting people that they met in Hollywood to come to see what they were doing," said Alexander-Sykes.

The movement was recognized for "bringing forward a new consciousness and awareness about racial justice."

They later purchased the property by fundraising through an art festival.

"The village was started in 1969, four, five years after the Watts riots," she said. "It was right in there with the civil rights movement. And so when we got started, there was a need for people to be involved."
Rozelle Sykes passed away in 1994. The trio and their supporters nurtured community and creativity through art and justice.

In July of 2013, a collective of Black organizers gathered there for a key meeting to continue laying the foundation for a now global movement nominated for the Nobel Peace Prize, Black Lives Matter. BLM co-founder Patrisse Cullors and some fellow organizers were residents of St. Elmo Village at the time.

Days after George Zimmerman was acquitted in the murder of Trayvon Martin, Cullors called a meeting.

"We all met in the art workshop and it was an incredible experience. I mean, I think we all really got the sense that we were at the edge of history," said Mark-Anthony Clayton-Johnson, a former resident of St. Elmo Village and founder of Frontline Wellness Network. They stress the key role Mr. and Mrs. Sykes played in providing a safe space.

"Space for us to gather, to grieve, to mourn, as well as to organize and strategize," said former resident and founder of Trap Heals, Damon Turner. "It's such a pivotal pillar to the idea of organizing."

RELATED | What is Black History Month, and why is it important?
EMBED More News Videos

February is Black History Month, a time the country highlights and celebrates the accomplishments of Black Americans.

The space is rich with history. It was once part of actress Mary Pickford's horse farm. St. Elmo village has welcomed stars and supporters like Diana Ross, Jeff Bridges and Edward James Olmos. Yet, it's far from exclusive. Anyone walking down the street can step inside. There's no barrier, no fence, and that's intentional -- they want everyone to feel welcomed.

"Your spirit is what brings you here. Your heart is more important than what you do," said Alexander-Sykes.

She continues safely organizing workshops through a pandemic.

"We're not just surviving but we're thriving," she said. "To be a nonprofit in Los Angeles for over 50 years is quite an accomplishment."

They dream of turning one of their properties into a teach-live workspace for artists to live and pour into the community.

"I believe through the arts, we can solve a lot of problems and save a lot of lives," Alexander-Sykes said.

"Contribute to St. Elmo Village. Make sure that it's something that's sustainable and is there to feed change-makers, artists and those of us who just want to live in a more beautiful and beneficial world -- that it's there for many, many years and generations to come," said Abdullah.