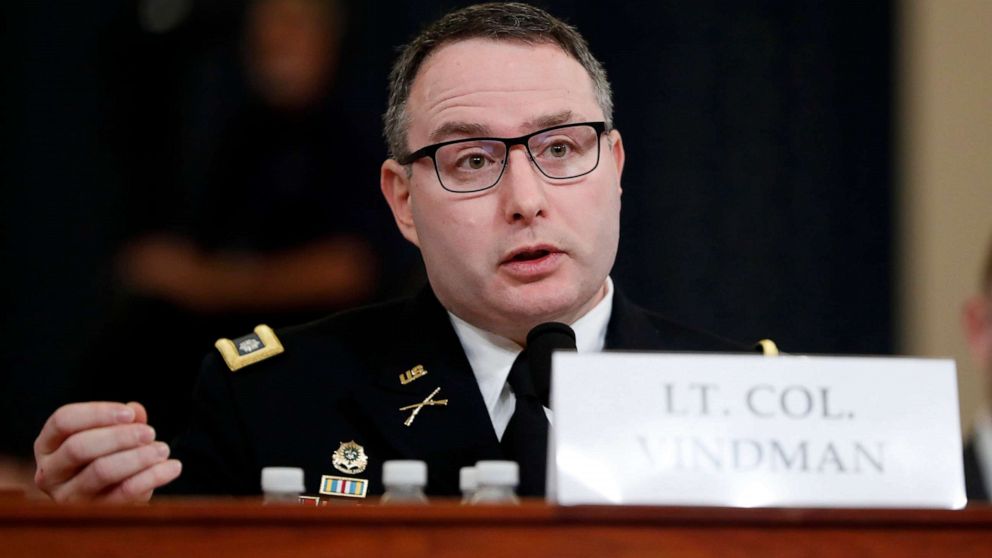 Key witnesses who were on the July phone call between President Donald Trump and the Ukrainian president testified for the first time in public on Tuesday, telling lawmakers they thought what they heard was inappropriate.

Today, U.S. Ambassador to the European Union Gordon Sondland, who amended his closed-door testimony to say he communicated a quid pro quo to Ukraine over military aid, is set to appear before lawmakers in a highly-anticipated public hearing.

Trump and his Republican allies have repeatedly insisted there was "no quid pro quo."

On today's "Start Here," ABC News Senior National Correspondent Terry Moran previews Sondland's testimony, "He's the first witness with direct contact with President Trump on this issue... he was, according to everyone else we've heard from, really the central go-between between President Trump's efforts to get Ukraine to conduct these investigations, and the people in the field and in the White House responsible for Ukraine policy."

Two prison guards at New York's Metropolitan Correctional Center who were on duty the night that accused sex trafficker Jeffrey Epstein died by suicide have been arrested on federal charges.

Video surveillance showed the guards "sat at their desk and appeared to have been asleep," according to prosecutors, and allegedly browsed the internet for sports news and motorcycles.

"They were supposed to every 30 minutes conduct the rounds, monitor Epstein every other inmate at MCC Manhattan and they didn't do it, according to federal prosecutors, but they doctored the logbooks to make make it look like they had," ABC News Senior Investigative Reporter Aaron Katersky tells the podcast.

Both guards have pleaded not guilty.

Protests in Iran over hiked oil prices have exploded in the last week and Amnest International estimates that more than 100 people have died across the country as a result.

Somaye Malekian, a reporter for ABC News in Tehran, outlines what makes these demonstrations different from previous anti-corruption protests.

'Leave it to the voters': As public impeachment hearings enter a second week, a majority of Americans have said their opinions on the impeachment of President Donald Trump were formed weeks ago, and many question whether anything will change when the process concludes.

'Deeply regret this situation': Thousands of cases of cottage cheese are being voluntarily recalled over fears they may contain metal and plastic.

'Big Tobacco's playbook': New York Attorney General Letitia James announced a lawsuit against Juul, the e-cigarette company, because of its marketing practices, which she says were geared toward youth.

'Devastating blow': An amateur Mixed Martial Arts (MMA) fighter has died after suffering a brain injury during a fight in the U.K.

'Who will win the fifth Democratic debate?': The field may be consolidating a bit, but this hasn't stopped many voters in our poll from saying they're considering multiple candidates. More than half said they were considering Joe Biden, and Elizabeth Warren and Bernie Sanders were clustered close together at around 40 percent. Pete Buttigieg and Kamala Harris round out the top tier, but things taper off quickly after that.

London has a new attraction. The British band The Who unveiled the first stone on the Music Walk of Fame in Camden Town, a district renowned for its musical history, on Tuesday.

The walk is a musical spinoff of the Hollywood Walk of Fame that honors celebrities in music, film and entertainment.

"Camden's roots with the music business go way back ... [it's got a] really good history of supporting the music business," said The Who lead singer Roger Daltrey. "So may it long reign, may this avenue of stars grow and grow and grow, because we have ... got the best music industry in the world."
Report a correction or typo
Related topics:
abc newsnational
Copyright © 2020 ABC News Internet Ventures.
More Videos
From CNN Newsource affiliates
TOP STORIES