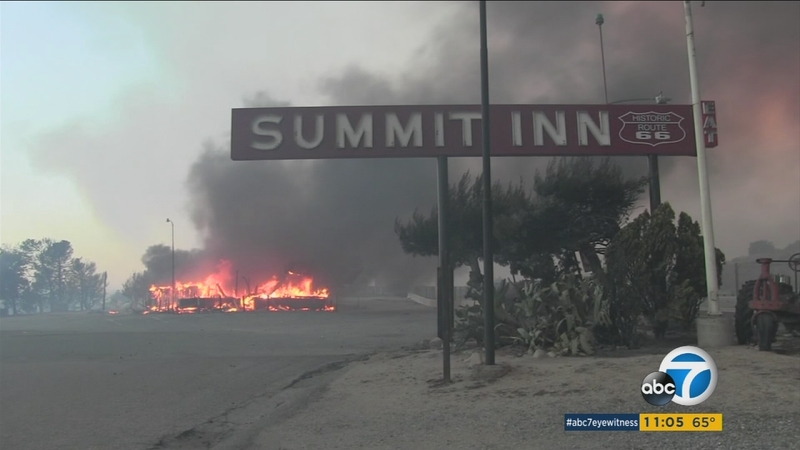 OAK HILLS, Calif. (KABC) -- The Summit Inn diner, a staple along the historic U.S. Route 66, was destroyed in the Blue Cut Fire on Tuesday.

The diner, located at 5970 Mariposa Rd., was established atop the summit of Cajon Pass in 1952.

Celebrities graced the diner during its heyday, including Elvis Presley, who reportedly learned his records weren't in the jukebox and walked out without eating.

While well-known for the ambience, the Summit Inn also had great food, including its famous ostrich burgers and ostrich omelets.

Route 66 was one of the original highways within the U.S. highway system and stretched from Chicago to Los Angeles, ending officially at the Santa Monica Pier.

The portion of Route 66 that the Summit Inn sat along was later replaced by Interstate 15.

The Blue Cut Fire broke out in the Cajon Pass as a 5-acre brush fire at about 10:30 a.m. on Tuesday.

The inferno later exploded to 18,000 acres and forced 82,000 people to evacuate their homes.

A GoFundMe page has been set up to rebuild the honored landmark. To donate, visit https://www.gofundme.com/2k6n744.