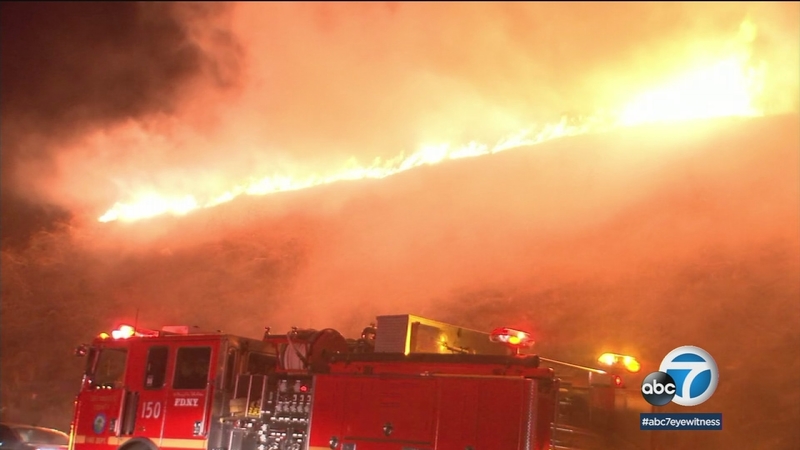 SUNLAND-TUJUNGA, LOS ANGELES (KABC) -- Firefighters got a handle on a fast-moving brush fire that broke out in the Sunland-Tujunga area Thursday night.

The fire was reported near a river bed shortly before 8 p.m. in the 11100 block of N. Oro Vista Avenue, according to Los Angeles Fire Department officials. More than 160 LAFD firefighters were at the scene.

The blaze was believed to have burned about 13 acres before firefighters reached a full knockdown of the fire at midnight. North-northeast wind gusts of up to 20 mph blew, which caused occasional spot fires, officials said.

Firefighters are battling a brush fire in the Sunland-Tujunga area Thursday night.

Fire officials said some homes were temporarily threatened in the Riverwood area, but several LAFD resources were strategically placed throughout the community.

"The concern was that the fire could get into where the Creek burn was, which was no fuel, but we have about 30 homes in the river with development -- a lot of people -- and then there's also people living in the wash, so we put everything on it right away to keep it out of those homes," said LAFD Assistant Chief Guy Tomlinson.

No evacuation orders were issued and no structures were destroyed, fire officials said.

Some residents in the area were in disbelief their neighborhood was struck again.

"I thought we were done with the fires because there was nothing left to burn. Between the La Tuna Canyon Fire and the Creek Fire and everything, I though it was all gone, it was over with, but it's not," said Tujunga resident Jaqui Baric.

Some resident said there are several homeless encampments in the area of the fires.