Sunset shutdown: Boulevard to be partially closed near 405 for a year during electrical work 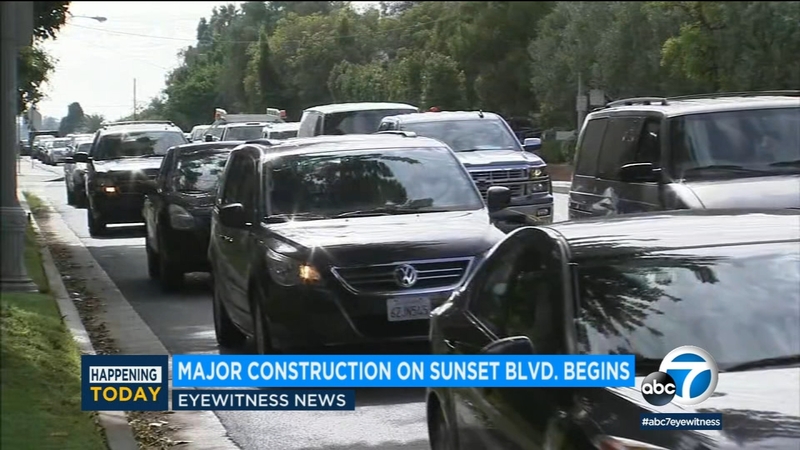 Sunset Blvd. to be partially closed for year during electrical work

LOS ANGELES (KABC) -- Sunset Boulevard, the winding road that connects the 405 Freeway with parts of Westwood and Bel Air, will be partially shut down for about a year while the city makes improvements in underground electrical infrastructure.

The closure, which begins Tuesday, is expected to disrupt traffic flow in neighborhoods near the freeway which already see heavy congestion during peak commuting hours.

The closure will affect two sections of the road: From the 405 to Bellagio Road and between Beverly Glen Boulevard and Carolwood Drive.
EMBED More News Videos

Westside traffic may be even worse than usual over the next year as the city partially shuts down Sunset Boulevard to improve electrical service in Bel Air and Westwood.

Officials will keep one lane open in each direction to allow for some traffic flow. The other lanes will be closed between 9 a.m. and 3:30 p.m. during the week and 8 a.m. to 6 p.m. on Saturdays.

He is hoping that if drivers stay away, it will be similar to the "Carmageddon" shutdown of the 405 Freeway for a weekend in 2011, when instead of creating a traffic nightmare, many drivers simply stayed off the roads during the closure.

"This is just like Carmageddon on the 405," Koretz said. "It could have been backed up for miles, but because everybody stayed away and worked with us, it wasn't a big deal. We're hoping the same thing will be true here."

Some of the systems in those areas are now operating at 120% of their capacity, according to the Los Angeles Department of Water and Power.