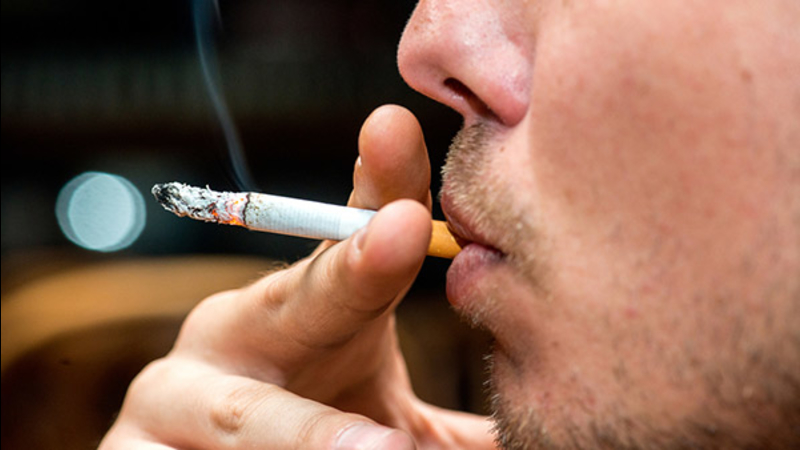 LOS ANGELES (KABC) -- A ballot measure that would increase state tax on cigarettes by $2 per pack is favored to pass, according to the latest Eyewitness News poll conducted by SurveyUSA.

Prop 56 calls for an increase on the state excise tax on cigarettes, other tobacco products and electronic cigarettes containing nicotine.

If this ballot measure passes, the current 87 cent tax would increase to $2.87. The latest poll results show that Prop 56 is favored to pass 57 percent to 35 percent.

The extra revenue from this tax would be used to increase spending on health care for low-income Californians, according to the state's official voter information guide.

Unlike 56, Prop 62 is not favored to pass. This measure pushes to end death penalty in California and replace it with life in prison. The SurveyUSA poll shows that Prop 62 is headed for defeat, as it trails by 18 points -- 35 percent to 53 percent.

Prop 64, which would legalize, regulate and tax recreational marijuana, is backed 51 percent to 40 percent, according to the poll. These numbers have not changed from polling numbers taken in September.

Also likely to pass is Prop 63, which would outlaw large-capacity magazines and would require background checks on ammo purchase. The measure is backed 63 percent to 27 percent.

In regards to the presidential race, the poll results show that both Donald Trump and Hillary Clinton have lost support in the past few weeks.

Compared to an identical poll conducted before the first presidential debate, Clinton is down 3 points, Trump is down 3 points and undecided voters have doubled. Currently, Clinton's lead is 26 percentage points - which is the same figure seen in the last poll.

The poll results show that support for Trump in California is currently down 30 percent, which leaves him at risk of receiving a smaller percentage of the popular vote than any Republican candidate in the past 100 years.

The survey results show that Trump's support has steadily eroded among the youngest voters, down from 29 percent in mid-September to 25 in late-September to 20 currently.

SurveyUSA interviewed 900 California adults between Thursday and Saturday. All interviews were conducted after the second 2016 presidential debate on Oct. 9. Of the adults, 820 were registered to vote. Of the registered, 725 were determined by SurveyUSA to have already voted in the presidential election or certain to do so before polls close on Nov. 8.

3. Is yours more a vote FOR Donald Trump, or more a vote AGAINST Hillary Clinton?
53% For Trump
46% Against Clinton
1% Not Sure

5. Is yours more a vote FOR Hillary Clinton or more a vote AGAINST Donald Trump?
63% For Clinton
36% Against Trump
1% Not Sure

7. Is yours more a vote FOR Gary Johnson? A vote AGAINST Donald Trump? Or a vote AGAINST Hillary Clinton?
45% For Johnson
33% Against Trump
21% Against Clinton
1% Not Sure

8. Is yours more a vote FOR Jill Stein? A vote AGAINST Hillary Clinton? Or a vote AGAINST Donald Trump?
49% For Stein
29% Against Clinton
21% Against Trump
2% Not Sure

13. Proposition 63 is known as the Firearms and Ammunition Sales Initiative. A YES vote would require persons who want to buy ammunition to pass a background check with the California Department of Justice. And Proposition 63 would make it against the law to possess large-capacity ammunition containers, known as magazines. Will you vote YES on 63, to require background checks on ammo purchases and to make large-capacity magazines illegal? Or will you vote NO on 63, which would leave the existing system in place?
63% Yes On 63
27% No On 63
10% Undecided
0% Will Not Vote