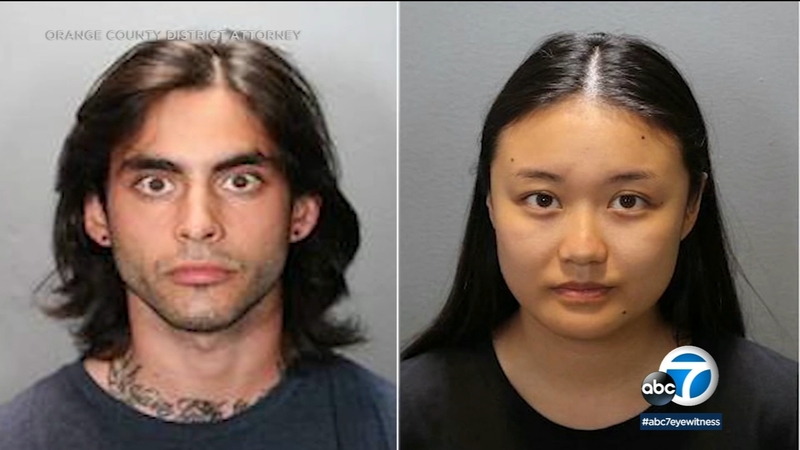 ORANGE, Calif. (KABC) -- The suspects in the killing of Aiden Leos, the 6-year-old boy who was shot on an Orange County freeway last month, have been charged, officials announced Tuesday.

Marcus Anthony Eriz, 24, has been charged with felony murder and discharge of a gun at an inhabited dwelling, with sentencing enhancements for causing death, county District Attorney Todd Spitzer said at an afternoon news conference.

Wynne Lee, 23, was charged with accessory after the fact and concealing a firearm in the vehicle.

Authorities believe Lee was the driver and Eriz was the gunman. The vehicle, a white Volkswagen, has been recovered, as has a weapon.

"In a civilized community, we should be able to drive our kid to school and not worry that they're going to be shot in the back," Orange County Supervisor Katrina Foley said at the press conference.

The two defendants, both residents of Costa Mesa, made a brief, virtual court appearance in Orange County on Tuesday.

A judge agreed with prosecutors' requests to increase Eriz's bail from $1 million to $2 million and set Lee's bail to $500,000.

Those bail amounts could be revisited when they return to court for an arraignment expected June 18.

Orange County District Attorney provided updates on charges filed against the two suspects in the fatal shooting of 6-year-old Aiden Leos in a suspected road rage shooting on the 55 Freeway in Orange.

Lee had initially been booked on murder charges, which prosecutors decided not to pursue against her in favor of the lesser charges. Spitzer said the charges reflect her alleged behavior after the shooting, rather than during the events leading up to the shooting, when she was believed to be driving the car.

"We all agreed that with respect to Ms. Lee, the evidence supported a filing of her behavior after the weapon was fired, but not with respect to conduct leading to that event," Spitzer said.

If convicted on all counts, Eriz faces a maximum sentence of 40 years to life, while Lee could be sentenced to three years in state prison and one year in county jail, according to the DA's office.

Spitzer on Tuesday emphasized that no other individuals were considered suspects in the case, and he asked for any harassment based on social media rumors to stop.

"They might be family members or whatever," the DA said. "I'm asking you to leave those people alone. ... They are not being looked at as criminals."

Aiden was buried Monday in a private ceremony.

The more than two-week manhunt came to an end Sunday with the arrest of Eriz and Lee at their home in Costa Mesa, according to the California Highway Patrol.

Neighbors of the home say they believe Eriz's grandmother lives there.

Eriz's Instagram page displayed videos that show him shooting various types of firearms on a range.

"His Instagram page is false," said Tom Gregg, referring to the suspect's social media page that suggested he still worked at the shop.
Gregg and his wife, Stephanie Gregg, condemned the fatal shooting, which she described as "devastating," and expressed their condolences to Aiden's family. "To have any kind of link is just too much," Stephanie Gregg said.