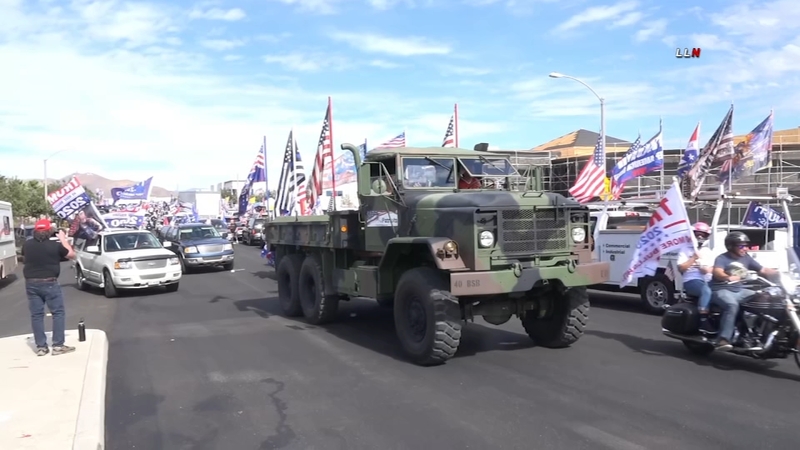 TEMECULA, Calif. (CNS) -- A massive caravan of Donald Trump supporters paraded for 60 miles through Riverside County on Sunday afternoon before converging on a large Temecula sports park, blocking access to the site, which included a vote center, snarling traffic and upsetting some voters, officials there said.

The winding caravan of pickup trucks and other vehicles adorned with pro-Trump signs and U.S. flags began at a Riverside restaurant and drove west along the 91 Freeway and then south on the 15 Freeway. They had been organized under a Twitter hashtag associated with similar events in other states.

With Election Day just around the corner, supporters of President Donald Trump took to the streets of the San Fernando Valley for a boisterous car rally.

The destination was the Ronald Reagan Sports Park in Temecula, a sprawling municipal community center with soccer fields and a skate park -- but also a voting location at the adjacent Temecula Community Recreation Center building. An estimated 4,000 people crowded the larger park about 2 p.m. in a peaceful, if boisterous, rally, officials said, according to The Times.

Capt. Zach Hall of the Riverside County Sheriff's Department said his deputies made no arrests but did field a few telephone complaints from voters who said the partisan signs, shirts and other materials potentially violated the 100-foot electioneering rule in state law. The deputies talked to poll workers who said the Trump supporters largely kept their distance from voters.

Deputies also had to scramble to unwind a massive traffic jam in an area where officials weren't prepared for so many vehicles at once, according to The Times.

"They kind of caught us off guard," said Hall, who heads the department's Temecula station. "We had a lot of traffic issues. The infrastructure there is not really designed for that kind of traffic."