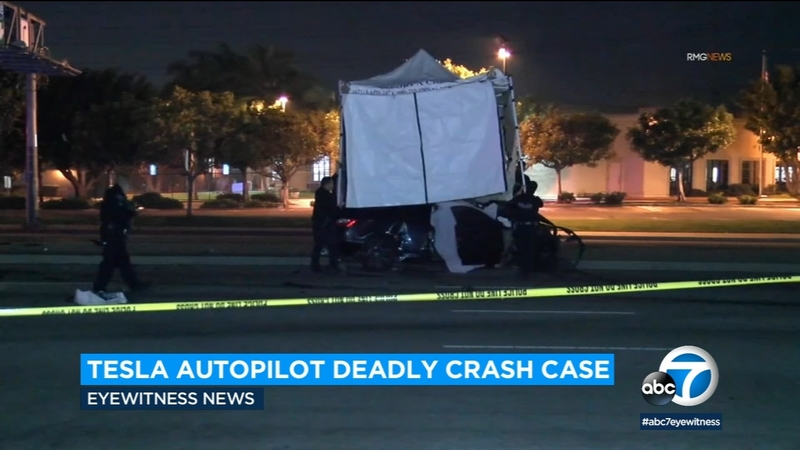 Tesla driver pleads not guilty in 2019 crash that killed 2

GARDENA, Calif. (KABC) -- A Tesla driver who was behind the wheel with autopilot engaged when his vehicle crashed and killed two people in Gardena pleaded not guilty Thursday.

Kevin George Aziz Riad, 27, is accused of running a red light and slamming into a Honda Civic at 74 mph back in 2019, killing the driver and a passenger.

The driver of a Tesla operating on autopilot must stand trial for a crash that killed two people in Gardena, a judge ruled.

The crash killed Gilberto Alcazar Lopez, 40, of Rancho Dominguez and Maria Guadalupe Nieves-Lopez, 39, of Lynwood, who were in the Civic and were on their first date that night, relatives told the Orange County Register.

Riad and a woman in the Tesla were hospitalized with non-life threatening injuries.

This is the first felony case in the United States against a driver using Tesla's automated driving system.

A Tesla engineer testified that Riad had a hand on the steering wheel, but did not apply brakes in the six minutes before the crash.

The U.S. government's road safety agency has dispatched a team to investigate the possibility that a Tesla involved in a Newport Beach crash that killed three people was operating on a partially automated driving system.

A police officer testified in May that several traffic signs warning motorists to slow down were posted near the end of the freeway.

Tesla has said that autopilot and a more sophisticated "full self-driving" system cannot drive themselves and that drivers must pay attention and be ready to react at anytime.

Tesla's autopilot system in general is the subject of two federal safety investigations.