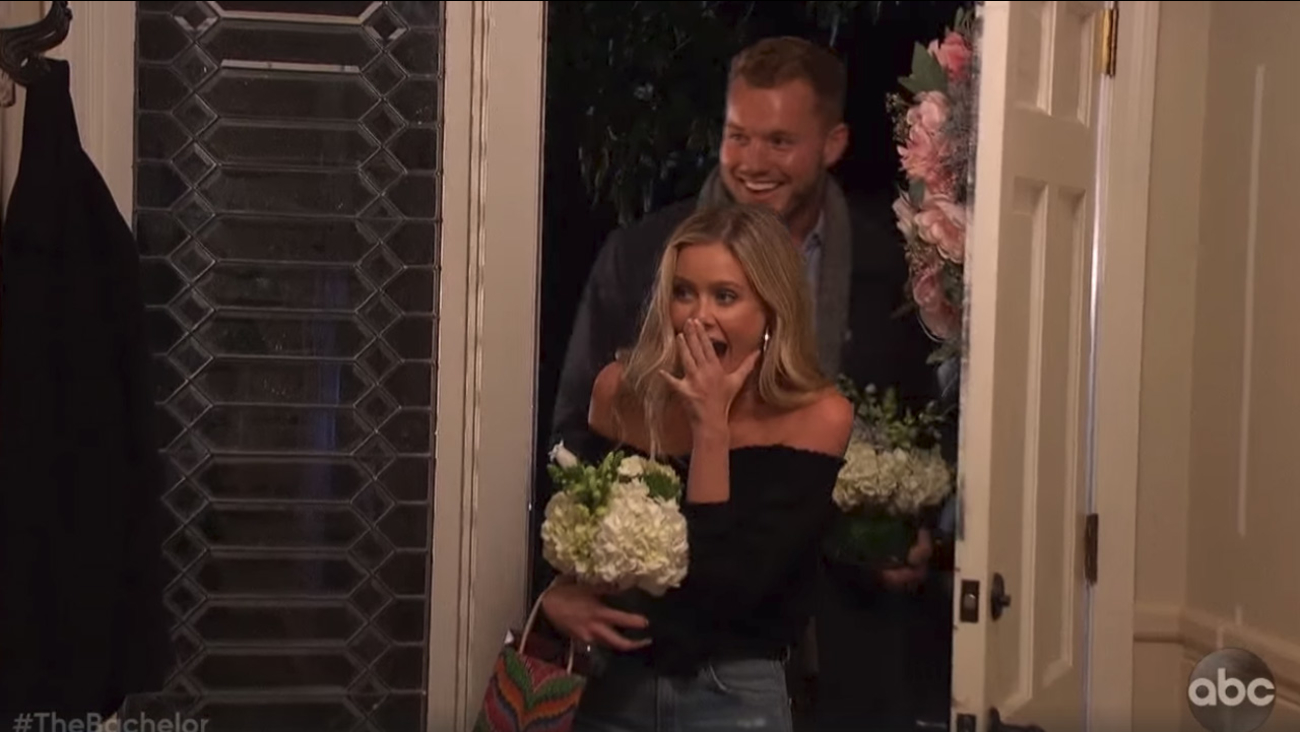 NEW YORK -- This is one of my favorite weeks. We actually get to see why these women are the way they are. Colton is diving in deep now and immersing himself for a day with these women's families in their hometowns. The show started with Colton showering...again. This is the cleanest "Bachelor" yet. He's also a very neat packer.

A horse and buggy showed up to pick up Caelynn and Colton. She gave him a tour of the historical sites and they stopped at her favorite ice cream shop. Then they sat on a bench by a beautiful, huge tree and started to imagine their lives together. Caelynn told Colton that he was describing everything she wanted when he talked about traveling and kids and getting a dog someday.

When you bring out the baby videos! 👶 #TheBachelor @colton pic.twitter.com/l6cIgeppYw

At her parents' house, they had a backyard barbecue and her father John (stepfather, but she calls him dad) was watching them like a hawk. He was very welcoming to Colton, but he was noticeably concerned. Caelynn told her sister that she told Colton about the sexual assault and he handled it really well. Despite this, her sister said that she's skeptical and she's worried about the sincerity of the situation. Her mother said that it's just so fast that it's taking time for her to wrap her head around the situation. She's worried that Caelynn could end up engaged and she doesn't know that they are ready for an engagement just yet. Her dad said that he's worried that her heart will get broken and he was just blown away by the situation. She told him that he's always been a perfect dad to her and it brought him to tears. John told Colton that he has to have no doubts if he were to ask for Caelynn to get married. He then asked Colton if he was ready. He made Colton promise that if he asks Caelynn to get married it's a life long commitment. After the serious talks were over, Colton and Caelynn watched some of her home movies and he got to see her as a baby. It was a really great hometown date! He seems like he could fit in really well into her family. The cherry on top of the sundae was when Caelynn told Colton that she loved him.

Hannah took Colton to a finishing school to turn him into a southern gentleman. He walked with a book on his head and they worked on their table manners. Did you know you are supposed to butter each individual bite of bread? Well, you are! Then the teacher just told him to be himself!

Later, he met her parents, her cousins, and her best friend. Colton gave a heartfelt toast, but her mother was very defensive and skeptical going into the night. When Hannah spoke with her cousins and friends, they all said they really liked him and they liked to see her get emotional about a man. She told them that she's not worried about the fact that he's a virgin, she respects him. Hannah's father brought up the other remaining women right off the bat. Colton said that he's not hiding the fact that there are other people left, but he tried to turn the focus to what he likes about Hannah. Her mother told her that he seems nice, but she's worried that she'll get hurt. She wants her to be very excited about her future with someone who will return those feelings. Colton meantime, asked her father for his permission to marry Hannah if their feelings develop to that point. He sat there stunned for a bit and then said, "Wow, that blows me away a little bit actually. It's very hard to do what you just did. if it continues working the way it is, I'd give you my blessing for sure," Hannah's dad said. Wow! Even her mom came around and told her if you want it, go get it, girl! Hannah ended the night by telling him that she's falling in love with him and he validated her feelings by saying he was falling in love with her too.

Tayshia started their date by taking Colton to a mystery location wearing a blindfold. She drove him for a long time until they got to an airfield and she revealed that they would be going skydiving. He said it was probably payback for taking her bungee jumping on their first date. He looked sick as they went up in the air. I don't know if this was something he ever pictured himself doing. He doesn't want to die a virgin! He screams like a girl! Thank goodness both of their parachutes worked.

At Tayshia's family's house, Colton met her parents and brothers. Her dad told Colton that he feels very protective of Tayshia and he can't bear to see her hurt again. He told her dad that he wouldn't be there if he didn't have very strong feelings for her. She and her mom talked a bit about the hurt she experienced from her divorce and her mother said she just wanted Tayshia to be treated right and be loved unconditionally. Tayshia's father said that six weeks seems way too fast to be considering an engagement. He asked Colton if he was sincere, and he asked if he was having those feelings for other people. He wanted to know how Colton could be in love with more than one person. Her father said that if it doesn't work out, just don't lead anyone on. Colton still asked her father if they progressed to that point if he could propose to Tayshia. Her father said while he appreciated him manning up, he just met him. He wants to make sure it's the right thing. Tayshia's father would not give the blessing! Wow! That does not happen often. Tayshia's brother told Colton that their father never saw things getting this far and he is just confused on what to do to best support Tayshia. Her dad was taken aback when she told him that he Colton asked her today, she would accept his proposal. HOLD UP - Dad changes his mind! He sat both of them down and gave them his blessing!

Cassie met up with Colton on the beach and she wanted to teach him how to surf. Colton is clearly smitten with her and said that she's the perfect combination of sexy and cute. Colton wiped out a ton trying to surf. After, he asked her where she is at, and she said that she knows how she feels but she wants to be sure. So, she wants to see how her family feels before she professes any feelings to him. 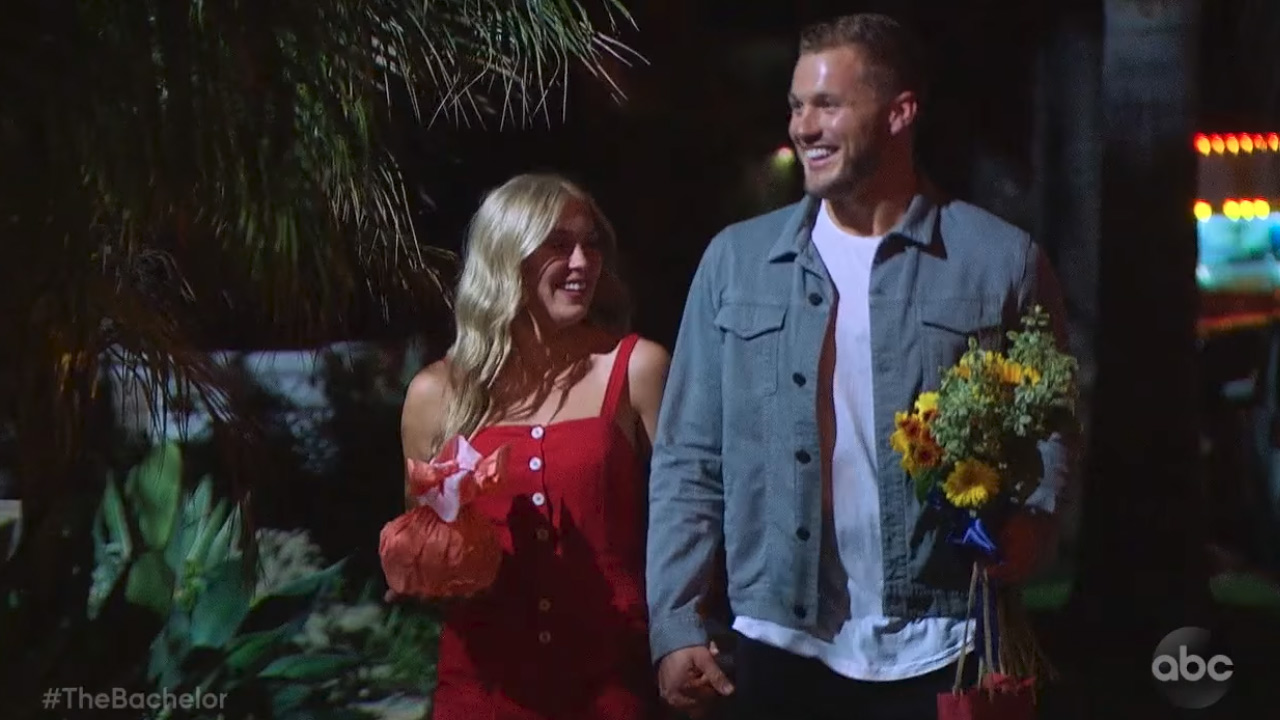 At her family's house, her dad was skeptical right off the bat. He didn't like seeing Colton's arms all around Cassie. He was hardcore rubbing Cassie's knee on the couch. His dad was shooting laser beams out of his eyes as they held hands. Cassie's sister told her not to settle for less than perfect. Her mother told Colton that she can tell how happy they are together and she thinks they have real chemistry. He told her mother that he's falling in love with her, and note, he's falling in love with all four of them. Yikes. She told her dad that Colton is amazing, but he didn't seem to buy it. Her dad was having a really hard time getting past the fact that other women are still involved. Cassie admitted that she sees potential, but she just doesn't know if she's ready to be engaged yet. She assured her father that she would make sure that he's right. Then it was Colton's turn with dad. He rattled off a bunch of reasons why he is falling in love with Cassie and then asked for his permission to propose to Cassie if she's the last one standing. He told Colton that engagement is a lifelong commitment and he said it would be a "premature blessing." Colton asked Cassie again where she was at and she said that she's excited to see where everything can go and she doesn't want it to be over. She still wouldn't say that she's falling for him.

Although Cassie may have seemed like the obvious choice to send home, that was not how it went down. Colton gave his final three roses to Hannah, Tayshia, and Cassie. He sent Caelynn and her perfect family packing. How heartbreaking! She told Cassie that she loves her, and said, "Bye friend, get engaged." Colton walked Caelynn out and told her that he didn't know what to say, but then Caelynn said that she felt like an idiot. He's a good guy but he shouldn't have been tossing around the "falling in love" phrase so easily. He didn't say anything to make her feel better or say that it wasn't just in her head. He froze. He did not know what to say so he really just said nothing. Does anyone else think she would make an amazing "Bachelorette?"

Next week, get ready for some fence jumping! It's about that time! Colton heads into the fantasy suites but then has a breakdown. There are a lot of tears from everyone. Tuesday night, it's "The Women Tell All!"
Report a correction or typo
Related topics:
arts & entertainmentcolton underwoodben higginsabc primetimethe bachelorcominguproseschris harrison
Copyright © 2022 KABC Television, LLC. All rights reserved.
COMINGUPROSES
Tensions escalate over shrimp among the women on 'The Bachelor'
Will 'The Bachelor' Clayton take a rose back?
After meeting 'The Bachelor' Clayton, one woman says she 'hates' him
Michelle hands out her final rose on 'The Bachelorette,' gets engaged
TOP STORIES
15-month-old is youngest person in LA County to die of COVID
Man who sparked probe into Kobe Bryant crash photos speaks out
Shooting on 5 Freeway in Sylmar leaves driver wounded
Statue honors Kobe Bryant, daughter Gianna at Calabasas crash site
LA City Councilman Mike Bonin says he won't seek reelection
Amy Schneider's historic 'Jeopardy!' run comes to an end
Santa Ana mail carrier surprises boy with cancer with his own truck
Show More
LACMA turns music into art for Interscope Records exhibit
Kaiser to be sued after mom of 3 denied COVID shot dies, lawyer says
Husband who lost wife in crash that killed Kobe Bryant still healing
Student stabbed during fight with another student in Westlake: Police
3 hospitalized after vehicle slams into Los Feliz wine bar
More TOP STORIES News