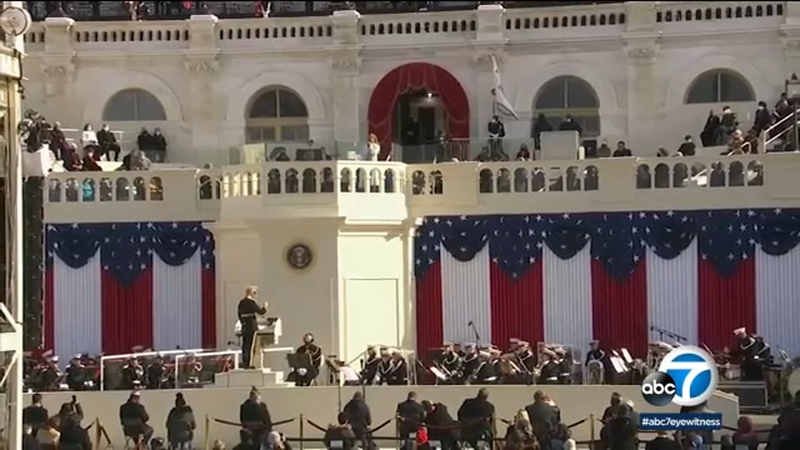 LOS ANGELES (KABC) -- Jennifer Lopez's rendition of "This Land is Your Land" was hailed by many as a stunning performance. But for some tribal members in Southern California, the song hit the wrong notes for being a part of the inaugural celebration.

Benny Wayne Sully, who is Sicangu Lakota Oyate, the song diminishes the history of Native Americans forced off their ancestral lands.

"That song just adds to the erasure...'This land was made for you and me.' It's like no, it wasn't. This land was taken from me for you," he said.

President Joe Biden has appointed Rep. Deb Haaland of New Mexico as Secretary of the Interior. If confirmed by the Senate she would be the first Native American in a cabinet position.

MORE: President Biden's cabinet lauded as one of most diverse in history
EMBED More News Videos

The presidential inauguration was a reflection of a historically-diverse presidential administration with Joe Biden's cabinet including a record number of women and women of color.

Meantime, Biden's Oval Office has gone through a transformation. It now has a mix of portraits and sculptures of American heroes, including the bust of Mexican American farm labor leader Cesar Chavez.

"It was an affirmation of all of the work that farm workers and immigrants and Latinos and those contributions that they've made to this country throughout the years," said Paul Chavez with the Cesar Chavez Foundation.

Also, Biden is making it clear that gay and transgender people will be a part of his administration with his cabinet pick of Pete Buttigieg and Dr. Rachel Levin.

The president also signed an executive order, protecting the LGBTQ community from discrimination in schools, workplaces and other aspects of life.

"We are now with an administration that is willing to put lived experiences of LGBT people at the forefront, where we deserve to be and be able to get the resources and demand for those resources in order for us not just survive but to thrive," said Joey Hernandez with the Los Angeles LGBT Center.

Also for the first time ever, the White House website will allow users to specify which pronouns they want to use

President-elect Joe Biden has tapped Pennsylvania Health Secretary Rachel Levine to be his assistant secretary of health, leaving her poised to become the first openly transgender

While LGBTQ advocates are celebrating the move forward, it comes with conservative backlash.

In response, the Heritage Foundation issued this statement:

"It doesn't take a crystal ball to know how Biden administration officials will interpret and apply these policies: men who identify as women must be allowed in women-only spaces, boys who identify as girls must be allowed to compete in the girls' athletic competitions, healthcare plans must pay for gender-transition procedures, doctors and hospitals must perform them, adoption agencies may not seek only married moms and dads to care for children in need."

Biden's order immediately prohibits any service member from being forced out of the military on the basis of gender identity.