The aerial show is expected to cover lots of ground, with the flyover covering 26 medical centers in the San Diego and Los Angeles areas.
KABC
By ABC7.com staff 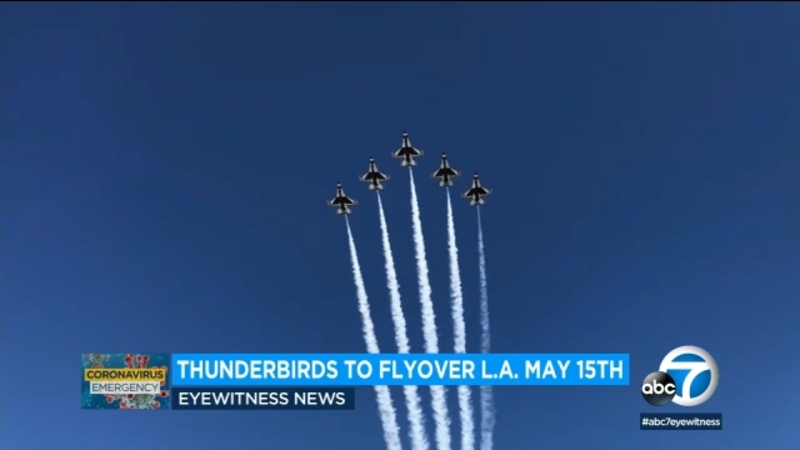 Thunderbirds to fly over SoCal Friday to honor frontline workers

LOS ANGELES (KABC) -- Make sure to look up at the sky this Friday, Southern California.

The U.S. Air Force Thunderbirds will fly over Los Angeles and San Diego as part of their tour to honor frontline workers during the coronavirus pandemic.

The aerial show is expected to cover lots of ground, with the flyover covering 26 medical centers in the San Diego and Los Angeles areas.

The route over San Diego will start Friday at noon and last about 15 minutes.

The route over Los Angeles will start at 1:10 p.m. and last about 30 minutes.

A map of the route is expected to be released Thursday.

Residents are advised they should be able to see the flyover from their homes and they are asked to not gather in groups to watch.

The Thunderbirds, alongside the U.S. Navy Blue Angels, had been making their way across other major U.S. cities, performing the air shows as a tribute to healthcare workers, first responders, military and other essential personnel.

"We hope to give onlookers a touching display of American resolve that honors those serving on the frontline our fight against COVID-19," said Lt. Col. John Caldwell, Thunderbirds commander and leader.

Earlier this month, the flight teams soared over Washington D.C., where many spectators were seen practicing physical distancing, though sidewalks around the National Mall were crowded. They also flew over Baltimore, Atlanta and Florida.