His greatest comeback yet got off to an electrifying start Thursday when he shot a 1-under 71 in the opening round.
KABC 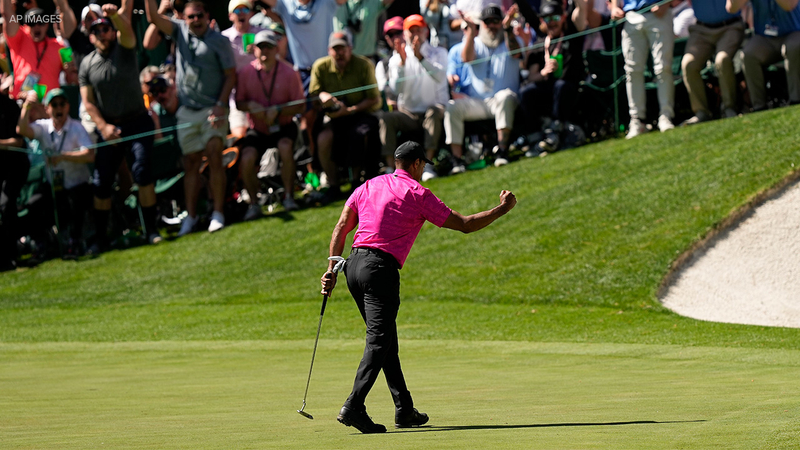 Golf legend Tiger Woods made his inspiring comeback Thursday as he hit the course at the Masters Tournament in Augusta, Georgia, just over a year after a horrific car crash. Woods finished 1-under par after completing 18 holes Thursday.

A standing ovation for Tiger Woods on No. 18 🐅

In his first round of competitive golf since the car crash that nearly took his right leg, Woods finished 1-under. #themasters pic.twitter.com/BytIlyzZN6

It was an exhilarating and surreal opening moment as they announced his name before teeing off sent fans cheering.

With that, Woods was officially back on the green in a historic comeback, a moment doctors, fans and Woods himself feared would not be possible after a near fatal car crash just 14 months ago.

As Woods walked briskly toward the clubhouse after a grueling day that stretched to nearly 5 1/2 hours, he heard shouts of "Way to go, Tiger!" from the spectators. He was just three strokes off the lead - with roughly half the field still on the course - after making three birdies, a pair of bogeys and a whole lot of solid pars - many of them salvaged by his deft touch around the greens.

Woods pulled off one last Houdini act at No. 18. After yanking his tee shot into the towering pine trees on the right, he had to lay up short of the green.

But he pitched to 6 feet and rolled in the putt to keep his score under par.

"I felt good," Woods said. "Once the adrenaline kicks in and I get into my own little world, I knew I should be able to handle business."

Yep, there's still a long way to go. Woods still must prove his body can bounce back day after day - four of them, should he make it to Sunday.

But it felt as if he was already a winner.

After the crash, doctors had to perform emergency surgery to repair multiple fractures to Woods' right leg, injuries so severe they considered amputating it.

"It's very fortunate that Mr. Woods was able to come out of this alive," Los Angeles County Sheriff's Department Deputy Carles Gonzalez said at a press conference after the crash.

Endurance and perseverance brought him back to one of the toughest courses in professional golf.

Augusta National Golf Course, known for its hills, will challenge Woods throughout the tournament. As one announcer put it, a portion of one fairway is about the same slope as the second turn at Daytona.

An image from the Master's website shows the 18 long holes Tiger will have to walk four times in four days, which Woods acknowledges will likely cause him problems.

"Walking is the hard part, normally this is not an easy walk to begin with," Woods said. "It's going to be a tough challenge and a challenge that I'm up for."
Woods has played through a string of injuries and setbacks for years, including winning the 2008 U.S. Open with a broken left leg and winning the 2019 Masters after several back and knee surgeries.

Despite the long layoff and the obvious physical limitations with screws and rods still holding the bones in place in his right leg, Woods clearly thinks he can win his sixth green jacket.

At 46, he would be the oldest Masters champion by three weeks over Jack Nicklaus.

The biggest question is how Woods holds up over 18 holes over four straight days, presuming he makes the cut as he always does at Augusta.

He walked 18 holes last week - his first big test - during a scouting trip with his son.

Playing an entire tournament will be much more challenging.

"Lots of ice," he said, breaking into a big grin.