KABC
By John Gregory
BEVERLY HILLS, Calif. (KABC) -- Police said the apparent owner of luxury cars seen racing through a Beverly Hills neighborhood likely does not have diplomatic immunity like he claimed.

A yellow Ferrari and a white Porsche were caught on video Saturday racing down Walden Drive, blowing past stop signs and putting drivers and pedestrians in danger.

When police confronted the person who claimed to own the Ferrari, he told officers he had diplomatic immunity.
At a Thursday news conference, Beverly Hills police said Sheik Khalid Hamad Al-Thani has been connected with the yellow Ferrari.

Police believe the sheik does not have any kind of diplomatic protections. They also think he has left the country. Authorities said they are beefing up patrols in the area just in case.

"In addition, our federal counterparts with the U.S. Department of State have been in contact with the Qatari Consulate to convey the city's perspective of the incident and our outrage," said Chief Dominick Rivetti with Beverly Hills police.

Authorities are also making it clear that the public's safety overrides any kind of diplomatic protection anyone may have.

"What I do know is you can't claim diplomatic immunity if you don't have it, and you can't use that as an excuse to jeopardize the public or commit crimes," Rivetti said.

While police will remain vigilant, they also acknowledge the most serious charge the drivers could face is reckless driving, which is a misdemeanor.

If you have any further information about the incident, you're urged to contact the Beverly Hills Police Department by calling the 24-hour tip-line at (310) 288-2656.
Report a correction or typo
Related topics:
trafficbeverly hillslos angeles countyviral videoporschestreet racingferraricaught on camera
Copyright © 2021 KABC-TV. All Rights Reserved.
RELATED 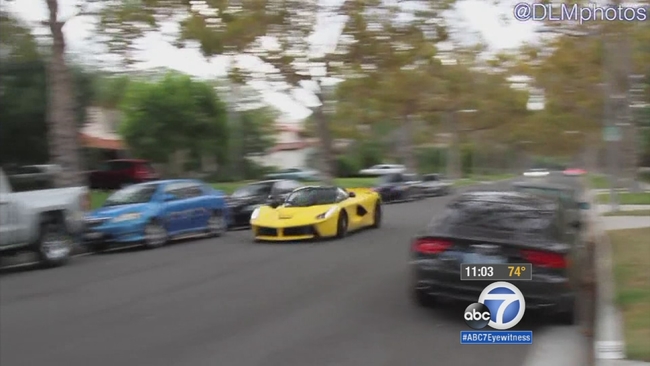