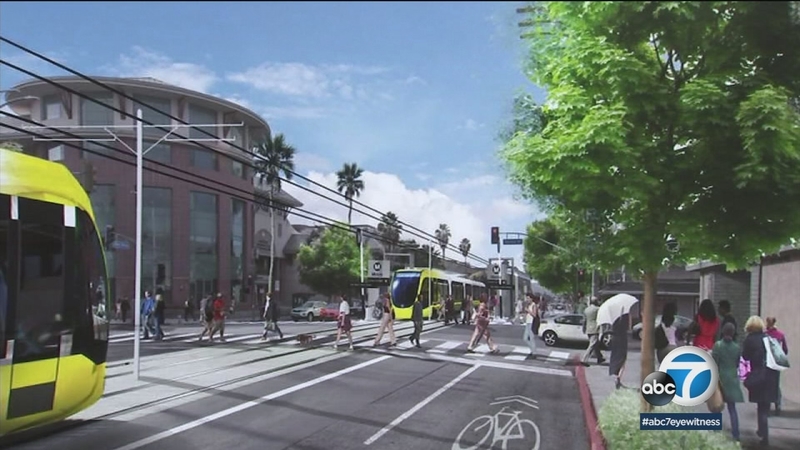 VAN NUYS, LOS ANGELES (KABC) -- Los Angeles Mayor Eric Garcetti and Metro officials are calling the approved light rail line for Van Nuys Boulevard a transit milestone, one that will bring a light rail line back to the eastern San Fernando Valley for the first time since 1952, and one that Garcetti said is desperately needed.

The project, approved last Thursday by the Metropolitan Board of Directors, will span more than nine miles and include 14 new stations connecting the Metro Orange Line station in Van Nuys to the Metrolink station in Sylmar/San Fernando, one-way in approximately 30 minutes.

These plans are now moving into the final environmental review stage. The new light rail line will eliminate the use of Rapid Bus Transit, and according to Garcetti, will breathe new life to this part of the Valley.

"Van Nuys Boulevard is going to be a place where we can move faster, more efficiently and a place where we will build even stronger community for the next generations to come," Garcetti said at a press conference.

"We have people travelling by bus every single day from Pacoima down to Van Nuys," Nury Martinez, Los Angeles city council member, said. "They deserve a system that will get them to work faster."

The $1.3 billion project is funded in part by Measure R and M, voter approved sales taxes, along with $400 million coming in from SB1, the state gas tax.