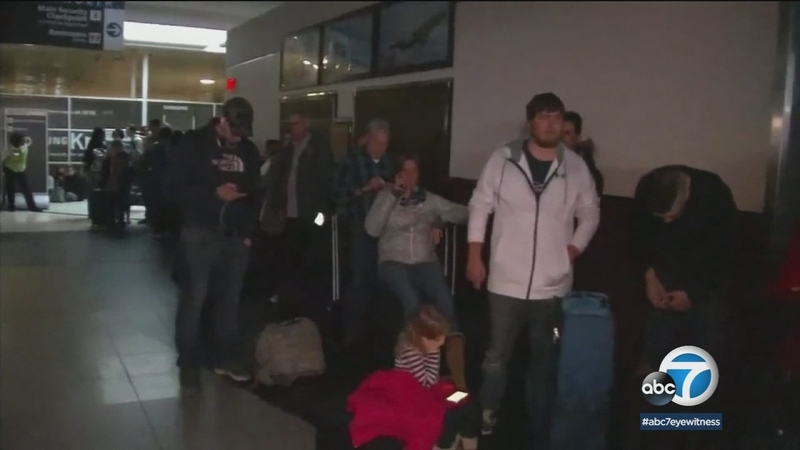 LOS ANGELES (KABC) -- A major power outage crippled the world's busiest airport on Sunday, leading to hundreds of flight delays and cancellations, including some at Los Angeles International Airport.

Passengers at Hartsfield-Jackson Atlanta International Airport were left in the dark when the lights suddenly went out at around 1 p.m.

Just minutes after midnight in Atlanta, Georgia Power said on its Twitter page that "Power has been restored on all concourses. 5,000+ meals are being delivered to passengers. Trains will be operational soon."

According to an LAX spokesperson, there were three canceled flights and three listed as delayed from LAX to Atlanta on Sunday. Two other flights were also canceled for Monday.

From Atlanta to LAX, there were three canceled flights and four listed as delayed. Two were listed as canceled for Monday.

Flightview.com reported at least 30 flights to and from both airports were canceled throughout the day.

Airport officials urged travelers to contact your airline if you have any questions about your flight.

According to a Georgia Power statement, a fire in an underground electrical facility may have been responsible for the outage. The cause of the fire was not known.

"No personnel or passengers were in danger at any time," the statement said.

The outage halted all outgoing flights at the Atlanta airport, and arriving planes were held on the ground at their point of departure. International flights were diverted, officials said.

Mayor Kasim Reed tweeted Sunday night that all passengers had been safely deplaned.

Delta, with its biggest hub operation in Atlanta, was the hardest hit. By evening, Delta had already canceled almost 800 Sunday flights and another 250 on Monday, nearly all of them in Atlanta, according to tracking service FlightAware.com.

Robert Mann, an aviation consultant and former American Airlines executive, said it likely will be Tuesday before Delta's operations in Atlanta return to normal, and for passengers "it could be most of the week" because there aren't many open seats on other flights in the last week before Christmas.

American Airlines canceled 24 departures and an equal number of arrivals, said spokesman Ross Feinstein. The airline also diverted three planes that were headed to Atlanta when the outage struck, sending them instead to Dallas, Nashville and back to Philadelphia.

At Southwest Airlines, about 70 Atlanta departures out of 120 scheduled for Sunday were canceled, an airline spokesman said in an email. United Airlines and JetBlue Airways were among carriers reporting delays or cancellations.

The FAA said it would staff the airport control tower throughout the night so that it can handle flights once they resume. The FAA said the tower could operate normally but flights were affected because airport equipment in the terminals was not working.

Hartsfield-Jackson, which serves 104 million passengers a year, is the world's busiest airport, a distinction it has held since 1998.

The airport serves an average of 275,000 passengers daily, according to its website. Nearly 2,500 planes arrive and depart each day.