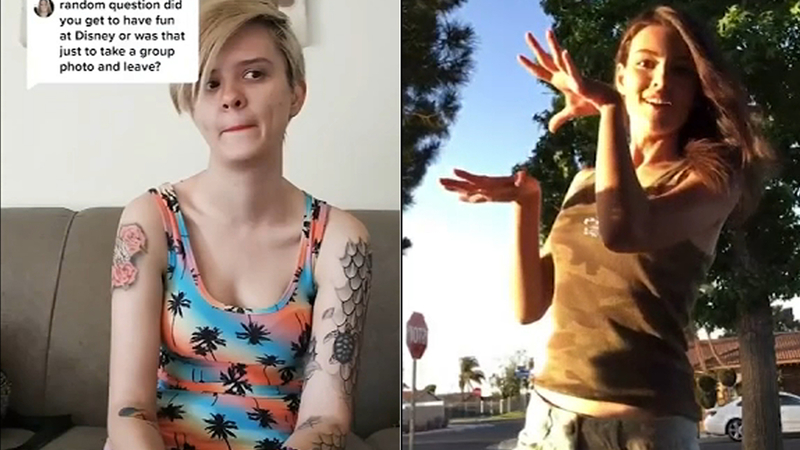 RIVERSIDE COUNTY, Calif. (KABC) -- Years after escaping abuse and neglect at the hands of their parents, at least two of the Turpin siblings have gained a large following on TikTok.

Jordan Turpin, who escaped from her Perris home and alerted authorities in early 2018, has nearly 700,000 followers on TikTok. Her older sister Jennifer has more than 41,000 followers.

While Jordan Turpin usually posts TikTok videos of herself singing or dancing, Jennifer has used the platform to go into detail about the years of abuse, but also what it was like more recently under conservatorships, lawyers and the Riverside County Public Guardian.

"When we were first rescued, we were all placed [under] a conservatorship," said Jennifer Turpin, regarding she and her six adult siblings. The video was posted on TikTok by one of her close friends on Sunday, May 22.

"We had a place to live. It was because of them we got into our first apartment," said Turpin about the conservatorship under the Riverside County Public Guardian. She said they also assisted them in finding therapy.

"[But] there was a lot of stuff they didn't teach us. We ended up having to figure it all out. But all in all, it made me smarter in trying to figure out things."

Jennifer Turpin went on to say that Vanessa Espinoza, the deputy public guardian who was assigned to work with the seven adult Turpin siblings, is being unfairly accused of neglecting her responsibilities.

"Vanessa's name shouldn't have been dragged through the mud like it was. In the beginning, she would treat us to Starbucks, and treat us to so many things," said Turpin in the TikTok video.

"She would go out of her way to make sure we got the trust funds we needed, or fight with our conservator lawyers," Turpin said. "She tried to be nice to us, and she would get in trouble for it."

Jennifer Turpin said her biggest complaints are with the attorneys who represented her. Jack Osborn was the attorney appointed to protect the interests of the seven adult Turpin siblings under the conservatorship.

The Riverside County children rescued after years of torture and abuse at the hands of their parents have struggled to get the care guaranteed to them, but now a new team is taking over.

"[The lawyers] lied to us. They lied to Vanessa," said Jennifer Turpin in the TikTok video. "They were trying to talk us into making a book or movie, and you know they would make a profit if we did."

Eyewitness News reached out to Jack Osborn for comment. In response to our request, Kenneth White with Brown, White & Osborn LLP, denied the accusations made by Jennifer Turpin.

"Ms. Turpin is mistaken," said White in a response to Eyewitness News. "That's not surprising given the horrific conditions in which she was confined and then the confusing world of courts and guardians in which she found herself. We continue to support her and all of the siblings and we're pleased that she's expressing herself and finding a voice through TikTok.

"These are the true facts: Our firm is paid a flat fee per conservatee we represent under our contract with the County of Riverside. There was no side deal to make any other money, we did not represent them in any media deal, nor would we accept or pursue such a deal.

"When it became clear that the siblings' media rights might be valuable, and that selling those rights might help meet the siblings' pressing financial needs, our team discussed the matter with them, and eventually brought it to the attention of the Probate Court, where the judge decided that the Public Guardian should be in charge of pursuing any such media agreements. We did not try to talk them into anything, and had no role in any negotiations over any media rights. If the Public Guardian has negotiated anything, we're not aware of it."

But Jennifer Turpin hasn't only talked about the years since she escaped from that Perris house of horrors. In previous videos posted to her own TikTok account, she has reflected on some of the trips she and her siblings would take with her parents.

"It was all for show," Turpin said. "It was all showing that we're this perfect happy family that we were not."

Turpin said her mother would often get compliments about her siblings' manners.

"They would say, 'Oh my gosh, you have so many kids and they're so well behaved.' And she's like 'I'm so proud of them,'" said Jennifer about her mother Louise Turpin.

"In reality, she didn't spend time with us. She just sat on the couch and watched TV all day and did nothing but order some of us around."

David and Louise Turpin are both serving life sentences in state prison. The six minor Turpin children were placed in foster care.