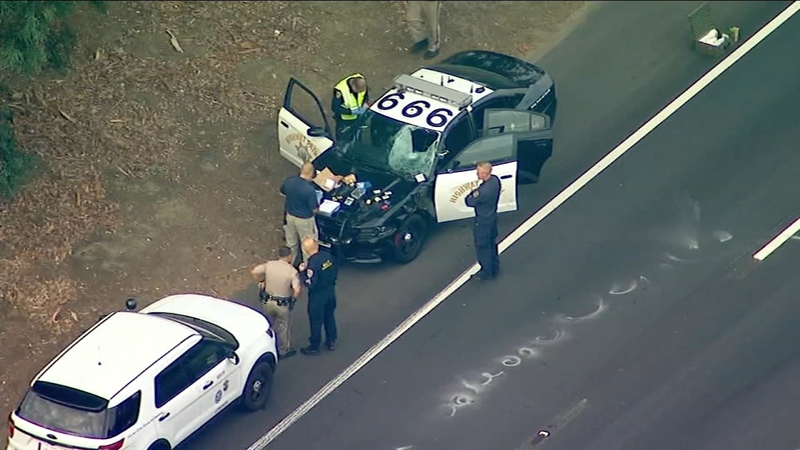 ENCINO, LOS ANGELES (KABC) -- An Uber passenger was struck and killed by a California Highway patrol vehicle after running across lanes and jumping the median of the 101 Freeway in Encino Monday morning, authorities said.

The CHP received a call about an Uber drive in distress near Balboa Avenue on the westbound side of the freeway around 3:30 a.m., according to Officer Weston Haver. The Uber driver stopped in traffic lanes after some sort of altercation between two passengers in the car, he added.

As officers conducted a traffic break on the westbound side of the freeway, another unit was traveling down eastbound lanes toward the scene to assist with the incident.

That's when the passenger ran across lanes, jumped the center divider to the opposite eastbound lanes and was struck by the incoming CHP vehicle, Haver said.

"(They) started punching each other and then I had to stop because it was distracting my driving," said the Uber driver, who wished to be identified only as Randy. "Without me knowing, he jumped out of the car," he added.

The driver said he picked up the passengers in West Hollywood, but it didn't appear that they were intoxicated.

The windshield of the CHP vehicle was heavily shattered though the officer was not injured, authorities said.

The identity of the person who died has not been released, but is described by authorities as a male adult in his 30s.