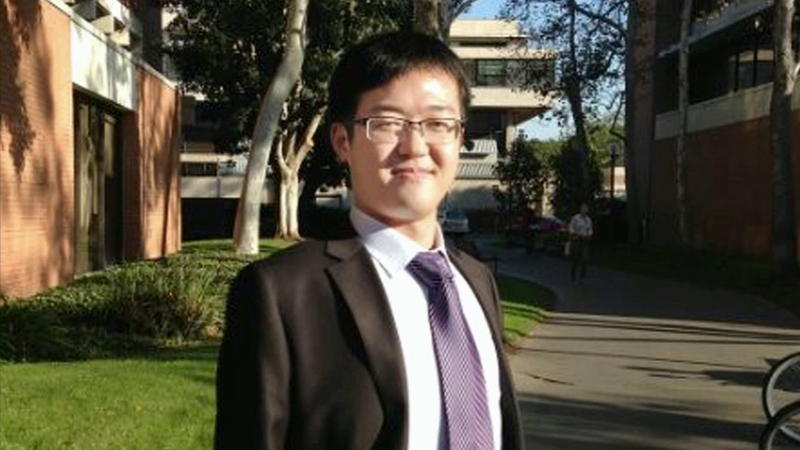 Authorities found the body of Xinran Ji, a Chinese electric engineering student, on the fourth floor of the City Park apartments in the 1200 block of W. 30th Street at 7:11 a.m.

During the investigation, police learned Ji was allegedly assaulted as he walked toward his residence near the area of 29th Street and Orchard Avenue around 12:45 a.m. Investigators believe Ji was struck with an unknown blunt object. He was able to make his way back to his apartment, where he later succumbed to his injuries.

"We don't have descriptions on those individuals," Los Angeles Police Department Lt. Andy Neiman said. "We do have a possible dark-colored vehicle that may or may not be associated with this crime and those individuals and we're hoping the public will come forward and provide any information they may have related to something they may have seen."

The motive for the attack remains unknown, but police say Ji had been studying with a study group and had just walked a friend home before heading toward his own apartment when the attack occurred.

The LAPD said in a tweet that it was a "stabbing death," but later deleted the tweet and said the information was not true.

The university said in a statement that the engineering graduate student died "from a head injury."

"From all early indications, this was an isolated incident and there was and is no apparent threat to the campus community," the school said.

Detectives from the LAPD's Criminal Gang Homicide Division were investigating the man's death, along with the USC Department of Public Safety, LAPD officials said.

USC's Dean of the Viterbi School of Engineering Yannis Yortsos issued a statement: "This news hits me very deeply. On behalf of the School, my heartfelt condolences go out to the family and friends of the victim."

Yortsos added that university officials have spoken to Ji's family and were making arrangements for them to travel to Los Angeles.

In 2012, two USC graduate students from China were murdered near campus in a botched robbery attempt. The victims were sitting in their car when they were shot to death.

The investigation is ongoing. Anyone with further information or who may have witnessed the crime was urged to contact the LAPD Criminal Gang and Homicide Division at (213) 485-4341.