Due to the suspension, the Sigma Nu fraternity chapter is barred from hosting or organizing any activities.
KABC 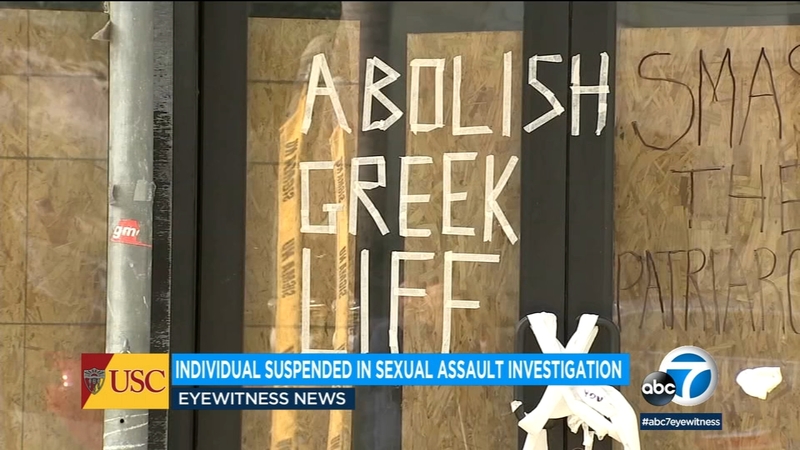 LOS ANGELES (KABC) -- As outrage grows over disturbing allegations of sexual assault and drugging incidents at a USC fraternity chapter, President Carol Folt said the university suspended an individual in connection with the investigation.

Folt's statement to the USC community Friday said the individual was placed on interim suspension Tuesday, a day before the Sigma Nu chapter was also temporarily suspended.

A campus crime alert sent Wednesday by the USC Department of Public Safety brought broader awareness to a reported sexual assault and other reports of drugging at the Sigma Nu fraternity house.

"That alert referenced two separate incidents: a police report of sexual assault at a fraternity last weekend, and confidential information that drugs may have been placed into drinks without consent at a party last month at the same house, leading to possible drug-facilitated sexual assaults," Folt's statement said.

"Such behaviors are deeply disturbing, they hurt people and go against everything we stand for as a community," the statement said. "We are sorry for the pain and anguish this is causing."

USC said it has notified the Los Angeles Police Department.

In another development, LAPD identified USC Sigma Nu chapter President Ryan Schiffilea as a suspect in another reported sexual assault case that happened on Oct. 16. While he hasn't been arrested or charged, Schiffilea was questioned by detectives, according to the Los Angeles Times.

It is not clear if Schiffilea is the student who was suspended.

Due to the suspension, the Sigma Nu fraternity chapter is barred from hosting or organizing any activities. No parties or social gatherings will be allowed at the fraternity house.