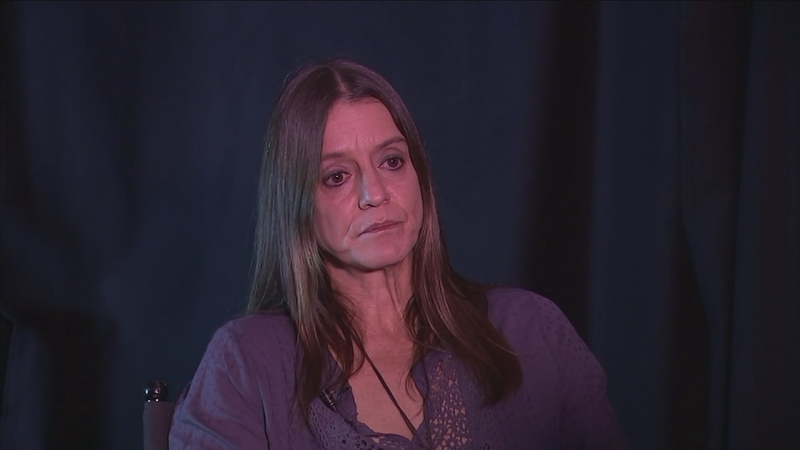 LOS ANGELES (KABC) -- Army veteran Jackie Baum's life was spiraling out of control. She was homeless, addicted to drugs and living under a bridge steps away from the VA's West Los Angeles campus.

Jackie struggled with bipolar disorder and PTSD from her rape in the military years ago, both of which were exacerbated by an addiction to pain pills and heroin.

"I didn't think I was ever going to get off of that," Jackie told Eyewitness News. "I just assumed I was going to die that way."

In March 2015, Vietnam veteran and outreach volunteer John Keaveney ran across Jackie under the Ohio Avenue Bridge and captured video of the encounter on his cellphone.

"What can we do to get you off the street today? If you want to get off?" Keaveney asked.

Vietnam Veteran John Keaveney and his son found Jackie Baum living under a bridge steps away from the VA Medical Center in West Los Angeles in March 2015.

"How long you been here?" Keaveney asked.

"If we come and help you do this tomorrow, will you do this?" Keaveney asked, offering to help her get help from the VA.

Jackie Baum served six years in the U.S. Army Reserves and trained as a nuclear, biological and chemical weapons specialist.

Keaveney and his son came back the next day and helped Jackie navigate the red tape at the West Los Angeles Veterans Campus. She received housing and counseling for her military sexual trauma and her addictions. She also entered a veterans' court diversion program to clear up some misdemeanor tickets.

But after Jackie relapsed a second time in May 2016, she was kicked out of VA housing. Soon after that, Jackie said a female licensed clinical social worker at the VA, who was also her psychotherapist for several months, told Jackie she was sexually attracted to her.

"When she made the offer of sex, I thought if I turned it down and offended her, she could make an unfavorable report to the court and I'd go to jail," Jackie told Eyewitness News.

The social worker, who we are not naming because she has not been charged with a crime, found Jackie new offsite housing and was Jackie's VA liaison to the courts during their three-month sexual relationship.

Jackie believes the social worker was manipulating her based on her legal case.

At the same time, Jackie said she and the social worker were meeting several times a week for sex, including once at an office on the VA campus. 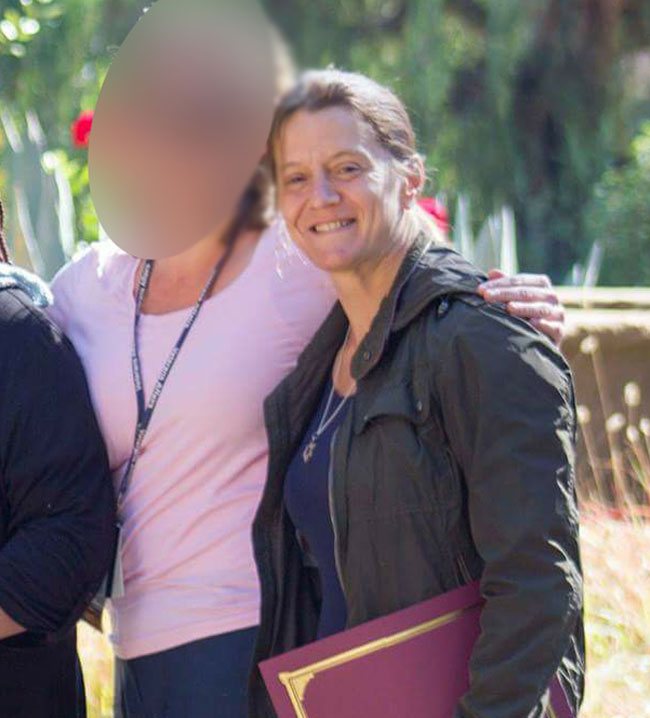 Jackie said they smoked pot together, drank beer and exchanged hundreds of text messages, emails and voicemails that Jackie provided to Eyewitness News.

"Call me and let me know if we can meet up, just so I can give you a hug and a kiss," the social worker said in one voicemail left for Jackie.

"I'll talk to you later, I love you - bye," she said in another voicemail.

Jackie, who is considered 100 percent disabled by the VA due in part to PTSD from her rape, said she was on five different psychiatric medications at the time. In the beginning, she said she believed their sexual relationship was consensual.

"I mean I did care about her, because she had been one person who came into my life and helped me put it back together," Jackie said.

Dr. Michael Carome, of the non-profit watchdog group Public Citizen, said a sexual relationship between a patient and a social worker-therapist can never be consensual, especially if you consider Jackie's psychiatric history.

"Absolutely not," Carome told Eyewitness News. "When you have a health care provider-patient relationship like this in which the power is significantly tilted toward the health care professional, this type of sexual relationship could never even be considered consensual. It represented sexual abuse, it's unacceptable."

Texts and emails depict a tumultuous relationship that unfolded over the summer of 2016. At one point, when Jackie said they thought they'd been caught by a VA supervisor, Jackie texted, "DELETE EVERYTHING ON THAT VA CELL."

On another day, the social worker texted to Jackie, "I deserve everything I get" and "I wish I could die without having to do it myself."

Near the end of the relationship, Jackie texted, "I don't want to have sex with you anymore."

Jackie told Eyewitness News she was "extremely angry and confused... like how did this go so wrong?"

In late August 2016, Jackie reported the social worker to the VA and the VA immediately launched an internal investigation. VA investigators ultimately substantiated "all allegations of misconduct" and deemed it "profound patient abuse in the form of emotional and physical-sexual exploitation."

According to the VA's investigative report, the social worker admitted to a "personal relationship" but denied it was sexual. The social worker told investigators that "she was essentially coerced...into communicating with the patient and writing the emails in the manner that she did" after claiming Jackie "would threaten to harm her."

VA investigators did not believe the social worker's version of events.

The VA's investigation also substantiates Jackie's allegation that a second social worker knew about their sexual relationship, failed to report it to the VA and even recommended a sex club to the pair. The VA report concludes that the second social worker "likely indirectly participated in the sexual exploitation of the patient" and "lied about it under oath."

Despite the VA's own conclusions in that damning report, the first social worker continued to work at the VA for another four months, although away from patient care.

Jackie said she was kept in the dark about the investigation and became alarmed months later when she ran into both of the social workers still working at the VA campus in West L.A.

And here's what Jackie finds most infuriating. Despite finding the social worker's conduct to be, "the most egregious form of intentional psychological and physical-sexual exploitation of a patient," the VA failed to report her to state regulators for more than a year.

The VA told Eyewitness News the delay was due to "some errors" that were initially made. State regulators have the ability to revoke or suspend a license. The social worker is currently under investigation by California's Board of Behavioral Sciences.

Jackie's disappointment with the VA brings back the trauma of her rape by a fellow soldier in Texas in 1989. Jackie said her rapist was transferred to another unit and never held criminally responsible.

The Army reopened her case in 1997 after the Aberdeen military sexual assault scandal exposed the extent to which women were being sexually assaulted and harassed in the military. But the statute of limitations had already expired.

"The Army did fail me, yes, in 1989. They failed to protect me then. Fast forward 28 years later and here this happens at the VA and they don't care to protect me this time either," Jackie said.

Jackie is far from alone. A government watchdog found a pattern in a recent audit of five unidentified VA Medical Centers that failed to report 90 percent of potentially dangerous VA medical providers to a national database meant to protect patients and did not report any of them to state licensing boards.

"To try to hide this information, to cover it up, to not report it to appropriate authorities, that is just failing their duty, their ethical duty to protect future patients," Carome said.

The VA has vowed to overhaul its reporting practices on problematic VA health care providers and lawmakers are pushing for new oversight. Maine Congressman Bruce Poliquin outright accused the VA of a deliberate cover-up to conceal poor medical care for veterans.

"I think you're protecting your butts, that's what I think is happening," Poliquin said while grilling top VA leaders at a Veterans Affairs Committee hearing in November. "The mismanagement is breathtaking!"

The VA declined our repeated requests for an on-camera interview, but in a statement to Eyewitness News said they "took immediate investigative action and removed the employee from all patient care" and have "implemented processes to ensure future delays in reporting to state licensing boards are avoided."

The VA would not answer any questions about the second social worker and whether she was ever disciplined. Eyewitness News learned through a Freedom of Information Act request that the second social worker is not only still working at the West L.A. Campus, she's received two pay raises since the VA's investigation concluded that she "indirectly participated in the sexual exploitation of the patient" and "lied under oath."

Jackie is more financially stable now after winning a substantial financial settlement against the Department of Veterans Affairs for the "alleged failure of the VA Greater Los Angeles Healthcare System to provide mental health treatment, as well as the alleged psychological and physical exploitation."

But Jackie still wants answers from the VA. Why did it take so long for them to report the social worker to the state? And why is that second social worker - who knew of their sexual relationship and recommended a sex club -- still working at the VA?

"We're talking about patients' lives and I think when you commit an offense at that level like was done with me, I don't think you should be able to get to do that a second time," Jackie said.

Eyewitness News learned the first social worker was - until recently - working as a contract employee for L.A. County Health in a patient call center, but the county said her work did not involve direct patient care.

The county would have had no way of knowing the results of the VA's investigation because she was allowed to resign and the VA failed to report her to state regulators in a timely manner. The social worker declined our repeated requests for an interview, citing patient confidentiality through her attorney.

The LAPD investigated the first social worker for several months and submitted a case to the Los Angeles County District Attorney's Office. The DA's office declined to file criminal charges citing "insufficient evidence to prove beyond a reasonable doubt the suspect threatened the victim to force her to engage in sexual conduct."

Jackie just recently filed a civil lawsuit against her seeking damages for alleged sexual harassment and "physical and emotional damages caused by the sexual abuse." She has not responded to the complaint.