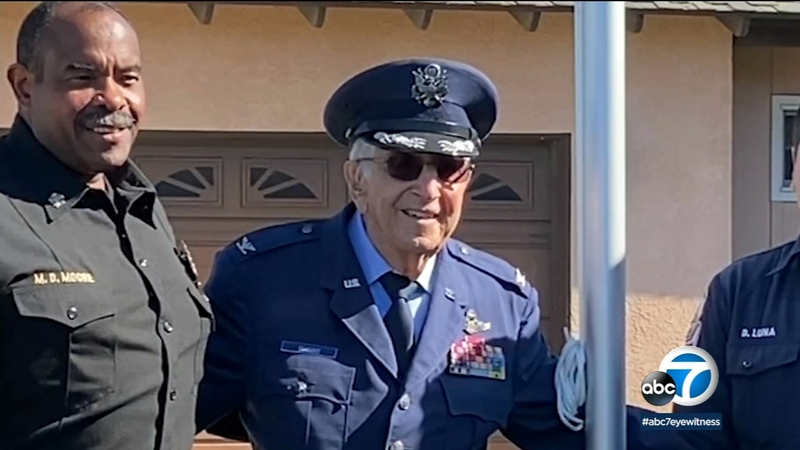 RIVERSIDE, Calif. (KABC) -- A flagpole displaying the American flag and the colors of the U.S. Air Force now stands proudly in front of the Southern California home of a 99-year-old retired Air Force veteran.

"That flag means a lot to me and the opportunities given to me by virtue of the United States of America," said Colonel Vincent Scarano.

Like many other World War II veterans, Scarano joined the Air Force after Pearl Harbor and served for 31 years, from 1942 to 1973. His parents were Italian immigrants and he grew up in New Jersey.

"Vincent Thomas Scarano is a man of integrity and honor who loves God and his country and loves to be of service. He would always teach us everyone needs three things in life: someone to love, something to look forward to and something to serve," said his daughter, Katherine Scarano.

The flagpole was gifted to him after a Riverside Fire Department firefighter had a chance encounter with Scarano's daughter, who admired a flagpole he had installed at his home and remarked that her father wanted one too.

The city of Riverside honored Colonel Scarano just in time for Veterans Day.

"He's a real patriot... he's a child of God, he's active in the community, he's got a big heart, he cares for people. That includes, of course, his family," said his son, Steve Scarano.