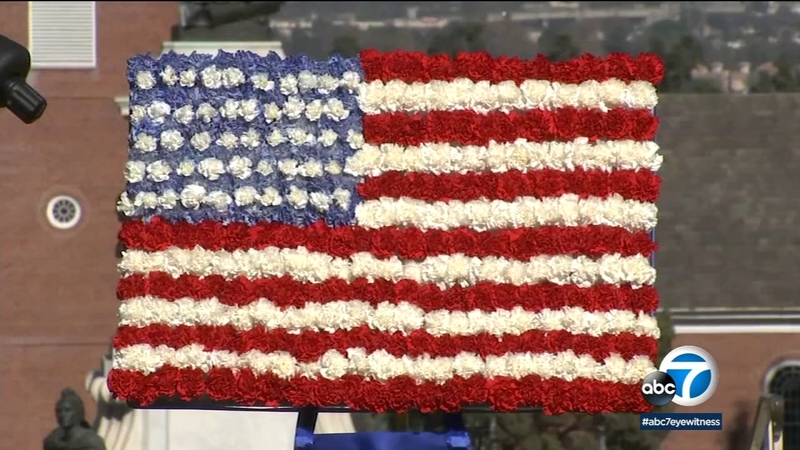 This is always a beautiful event, and today was unlike any other Veterans Day. There were speakers and bands, but no audience as in most years.

The 61st annual Veterans Day Celebration at Forest Lawn Hollywood Hills honored members of the U.S. military with a flyover of planes used in World War II training missions by The Condor Squadron, and musical performances by the Band of the California Battalion in Civil War uniforms.

The keynote speech was delivered by Stephanie Stone, Los Angeles County's director of veterans affairs. This year as some veterans struggle dealing with the isolationism of the pandemic, the message was you are remembered.

Veterans Day has its roots in a proclamation issued by President Woodrow Wilson in November 1919, a year after World War I ended, designating Nov. 11 as Armistice Day. States soon started declaring Nov. 11 a legal holiday. Congress made it a federal holiday in 1938, dedicated to the cause of
world peace.

In 1954, following World War II and the Korean War, Congress, at the urging of veterans service organizations, passed a law renaming Armistice Day Veterans Day. From 1971-1977, Veterans Day was held in late October. A 1975 law returned it to Nov. 11, beginning in 1978.

"America's veterans have fought to defend our country, its values and its interests since the first days of our founding,'' President Donald Trump said in his Veterans Day proclamation. "Their courage and fortitude in the face of adversity serve as an example for all Americans. On Veterans Day, we pause to pay tribute to all who have proudly worn our nation's uniform."

The Battleship Iowa Museum and Veterans National Entertainment Workshop will observe Veterans Day with Veterans Day West 2020,'' an online concert with the theme of United We Stand -- Stronger Together!''

The concert will feature U.S. military veteran performers from around the nation singing popular songs of unity, togetherness and friendship. The concert will also feature a performance by opera singer Renee Fleming, and salutes to veterans from impressionist Rich Little and other celebrities.

The Los Angeles LGBT Center will mark Veterans Day with an online screening of the 21-minute documentary on LGBTQ veterans before, during and after their military service, Our Service, Our Stories: The Evolution of the LGBT Military Experience.''

Veterans featured in the documentary served between 1951 and 2017 in the Korean, Vietnam and Persian Gulf wars and Afghanistan, Iraq and current outposts.

"Our Service, Our Stories: The Evolution of the LGBT Military Experience'' will be streamed at lalgbtcenter.org/watch beginning at 11 a.m. Following Veterans Day, it can be viewed on the center's YouTube channel, youtube.com/lalgbtcenter.