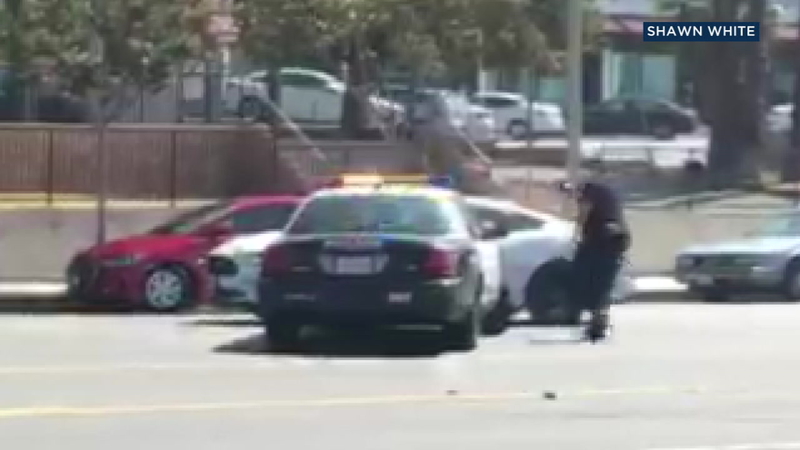 GLENDALE, Calif. (KABC) -- Police searched for a petty theft suspect in Glendale after he rammed a patrol vehicle and escaped arrest, authorities said.

Authorities said a man was reported stealing liquor at a Vons grocery store around 10 a.m. near Pennsylvania Avenue and Foothill Boulevard. When officers arrived and tried to pull the suspect over, he did not stop and rammed into a patrol car, according to Glendale police.

Another patrol vehicle tried to pin the suspect, but he maneuvered back and forth until he successfully freed himself and drove away. The white sedan did not get very far, but police said the suspect ran out and got away.

A perimeter was set up near Boston Avenue and Foothill Boulevard as a search continued for the man, believed to be wearing a blue flannel shirt and black pants.

Update: Chamlian Armenian School is on lock down. Police are still actively searching for the suspect. Keep your doors locked and call 911 if you see a male as described in the previous post wearing a blue flannel shirt with black pants. @MyGlendale

Nearby Chamlian Armenian School was shut down as a precaution. No evacuations were in place, police said.

But despite the massive manhunt, they could not find the suspect. They do not believe the man was armed, but said he could be dangerous.

The witness who shot the cellphone video said he was impressed how police handled the situation.

Authorities said despite not finding the suspect, they will be on the lookout for him.
Report a correction or typo
Related topics:
glendalelos angeles countytheftpolicecaught on camera
Copyright © 2021 KABC-TV. All Rights Reserved.
More Videos
From CNN Newsource affiliates
TOP STORIES