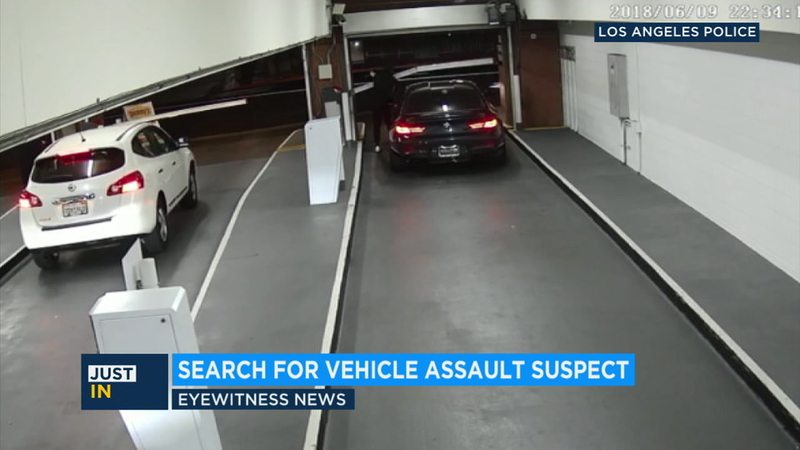 LOS ANGELES (KABC) -- In an apparent case of parking garage rage, police are looking for a man seen on video hitting a parking attendant with his car and fleeing after an apparent dispute over his attempt to leave the structure.

Surveillance video shows the suspect having trouble leaving the parking structure in the 800 block of S. Figueroa Street in downtown Los Angeles on June 9 around 11:30 p.m.

The gate won't let him out - although it's not clear from the video if it was a mechanical problem or a failure to pay.

The suspect argues with the parking attendant and then grabs the gate by hand and jams it up enough to let his black BMW slip by.

A man is seen on surveillance video lifting an exit gate shortly before hitting the parking attendant who tried to stop him from leaving the garage in downtown LA.

But at that point the attendant rushes over and gets in front of the car, trying to stop him from leaving.

The car idles forward, hitting the parking attendant and knocking him to the ground.

As other cars trying to leave the garage are now stuck, passengers from other vehicles rush over to try to help the attendant.

But after about a minute, the man grabs the attendant from the ground and drags him to the side, then takes off in his car.

The suspect is described as a male, possibly Persian, with black hair, brown eyes and black facial hair, standing about 5 feet 10 inches tall and weighing 180 pounds. He appears to be around 30 to 55 years old. The suspect's vehicle is described as a 2015-2018 black BMW M6 four-door with Galpin Ford dealer plates.