VIDEO: P-61 chased by another mountain lion moments before being fatally struck on 405 Freeway 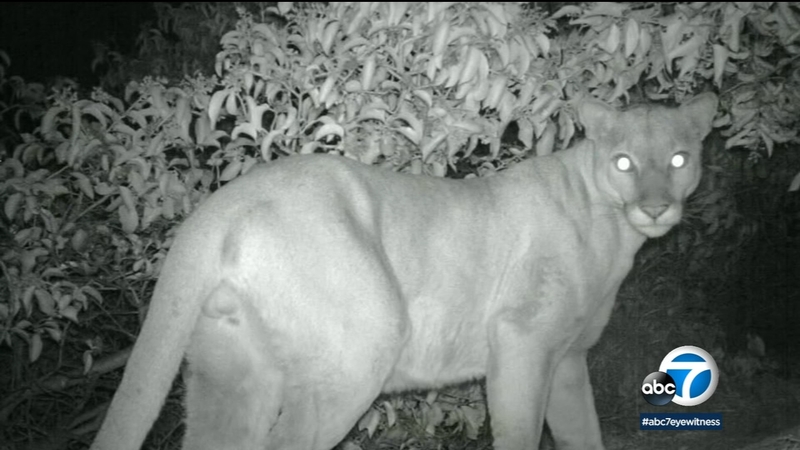 VIDEO: P-61 chased by another lion before being fatally struck on 405

LOS ANGELES (KABC) -- Minutes before the mountain lion known as P-61 was struck and killed on the 405 Freeway in the Sepulveda Pass, he was being chased by another lion in the area, according to surveillance video released Wednesday by the National Park Service.

P-61 died about 4 a.m. Sept. 7 while trying to cross the interstate between Bel Air Crest Road and the Sepulveda Boulevard underpass, Park Service officials said. The animal had successfully crossed the 405 in the same area in July, making him only the second lion known to have done so.

The grainy, newly released footage shows P-61 climbing into a tree after being chased about 3 a.m. by an unidentified lion, the agency said. The second lion climbs into the tree about two minutes later.

Video shows two lions descending from the tree about 30 minutes afterward and running away, one following the other. Additional footage shows P-61 crossing a road and heading south, adjacent to the 405.

Moments later, after crossing five lanes of traffic, he was hit by a vehicle on the freeway.

"This is what male mountain lions instinctively do and it did not end up in P-61's favor," said Jeff Sikich, a biologist with Santa Monica Mountains National Recreation Area. "The difference is that this is real-life mountain lion behavior playing out in an urban and fragmented landscape that is complicated by busy roads and development."
Report a correction or typo
Related topics:
los angeleslos angeles countycar crashmountain lion sightinganimalfreeway
Copyright © 2021 KABC-TV. All Rights Reserved.
TOP STORIES
Strike dodged with deal between film and TV crews, studios
Dodgers say Knebel, not Scherzer, will start Game 1 of NLCS
Robert Durst hospitalized with COVID-19, his lawyer says
MacArthur Park temporarily closes for cleanup, renovations
Bill Clinton expected to be released from OC hospital soon: Doctors
Masks and vaccines are a must this holiday season, CDC says
Woman offering $600 reward after car was stolen with dog inside
Show More
8th grader wears sign denouncing Christopher Columbus to school
Carson residents say foul odor in the air is making them sick
Hot, dry, windy: Red flag warning in effect for LA, Ventura counties
Here are the systems in place to prevent mix-ups of vaccine shots
Gunman shoots 3 Texas deputies from behind, killing one: police
More TOP STORIES News