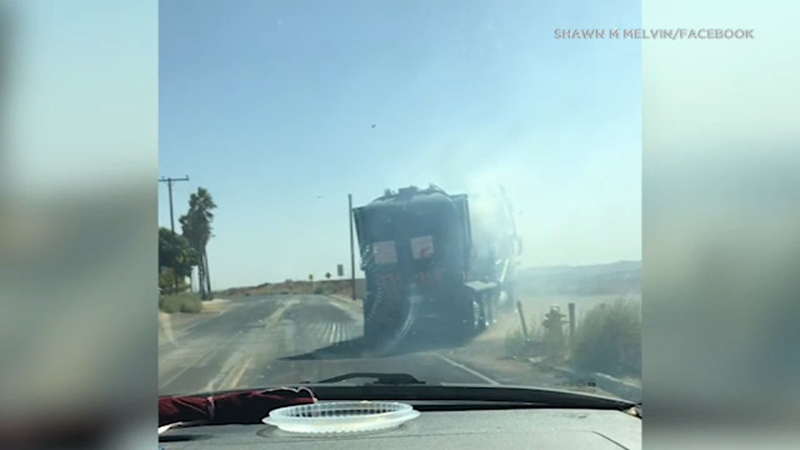 CALIMESA, Calif. (KABC) -- Determining the cause of any fire usually takes some time, but that isn't the case for a wildfire that erupted in Calimesa Thursday which killed at least one person and destroyed dozens of structures.

Video shows the moments before a trash truck dumped burning garbage in the area, igniting the blaze which resulted in the loss of 76 structures, mainly homes at a hilltop mobile home park, according to fire officials.

The flames from the burning pile of trash quickly spread and ignited nearby vegetation in flames, according to Cal Fire Riverside Capt. Fernando Herrera.

Shawn Melvin was driving behind the garbage truck and his son in the passenger seat managed to capture video, which shows plumes of smoke billowing out from the back of the truck.

"I was pleading with him, begging with him: 'Don't stop here. If you already have fire it's going to catch, even pull onto the overpass on the 10 Freeway, anywhere but here," Melvin said.

He added that the driver of the truck seemed to have a blank stare when Melvin confronted him.

"He honestly said 'I don't know what to do, what do you do?' and then him following protocol where he works of dumping the trash out when it's on fire. What they were trying to do is save a $150,000 rig and (it) ended up that protocol bit him in the butt, because you don't do that on a windy day," Melvin said.

Considering the damage that action caused, the fate of the driver remains unclear.

"We've identified the cause obviously, but investigating whether or not there will be any criminal charges," said Riverside County Sheriff Chad Bianco.