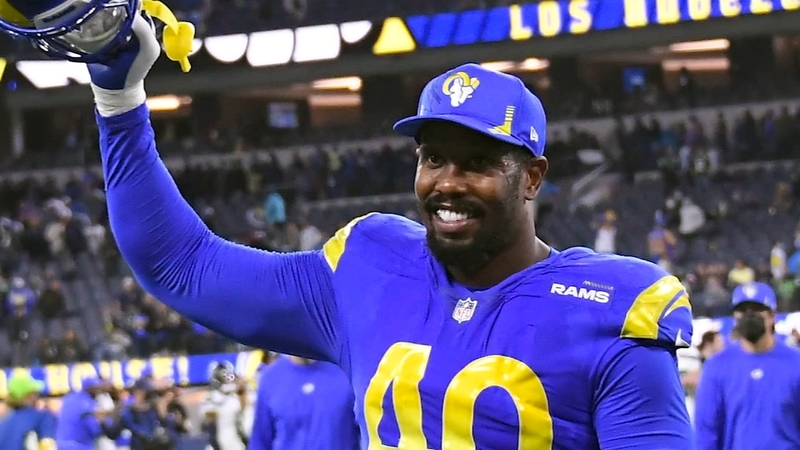 LOS ANGELES (KABC) -- The Rams playoff game Monday night could be a stepping stone to the Super Bowl at SoFi Stadium. The team is loaded with stars such as Aaron Donald, Cooper Kupp and Von Miller to name a few.

We spoke one-on-one with L.A.'s linebacker about how being a Super Bowl MVP could be an asset.

Miller is an eight-time pro-bowl player the Rams traded for mid-season. Their hope is he'll lead them to where he's been before - to a Super Bowl championship.

There's enormous pressure on Matthew Stafford to win his first playoff game on Monday, but Miller points out that there's pressure on everyone.

The Rams are gearing up to play the first-ever Monday night football playoff game and the team is feeling confident.

"I truly believe pressure is a privilege. To feel pressure...is to feel alive. The way you handle that is stay in the moment and not get too far ahead."

At the moment, he is a Ram and cautiously optimistic it'll work out with a new contract. One of his greatest adjustments has not been on the field - it's been moving away from his first child who was born in August.

"It's been tough. My son's name is Valor - it means showing extreme bravery or courage in the face of danger...I named him after me and Dad has to go out there and show him what his name means."

Watch the full interview with Miller in the media player at the top of this page.