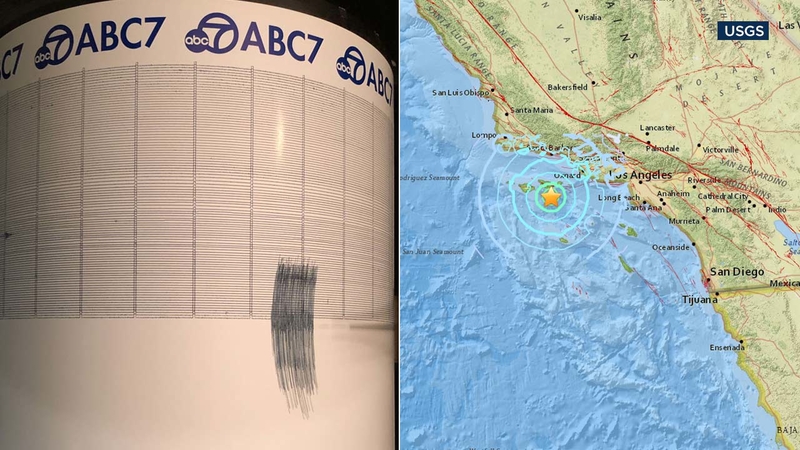 The temblor struck around 12:29 p.m. PT around 39 miles southwest of Oxnard, according to the U.S. Geological Survey.

The temblor was initially measured at 5.0 in magnitude but was upgraded to 5.3 a short time later.

"All of a sudden for about three or four seconds I felt the ground move, and it just was an out-of-body experience, like it should not happen," said Will Tran, who was visiting the Santa Monica area from San Francisco.

The Ventura County Sheriff's Department's Office of Emergency Services said there have been no reports of damage. The Ventura County Fire Department tweeted out a photo taken from a fishing boat that showed dust rising from cliffsides on Santa Cruz Island.

Following the quake, the Los Angeles Fire Department went into earthquake mode to survey the greater Los Angeles area. During this survey, firefighters examined transportation infrastructures, large places where people gather, apartment buildings, dams and power lines. LAFD officials said firefighters found no damage during the survey, which was done in the air and on the ground, and no injuries were reported.

The Los Angeles Police Department tweeted to confirm that there were no reports of damage or injuries within the city.

Some light structural damage was reported on the islands, but there were no other reports of any injuries or major damage.

Seismologist Dr. Lucy Jones said the offshore faults that produced Thursday's earthquake are part of the system that moves Southern California around a bend of the San Andreas fault.

Seismologists from Caltech and the U.S. Geological Survey discussed the 5.3-magnitude earthquake that struck near Channel Islands on Thursday, April 5, 2018.

The quake was approximately 9 miles deep, which is relatively deep for a California earthquake, Caltech seismologist Dr. Jennifer Andrews and USGS seismologist Susan Huff said at an afternoon press conference.

Andrews and Huff said a test system on a Caltech computer sent out a warning alarm 10 seconds prior to the shaking. They described the temblor as a "strike-slip" event.