Freezing temps cause hundreds to become stranded on Mount Baldy 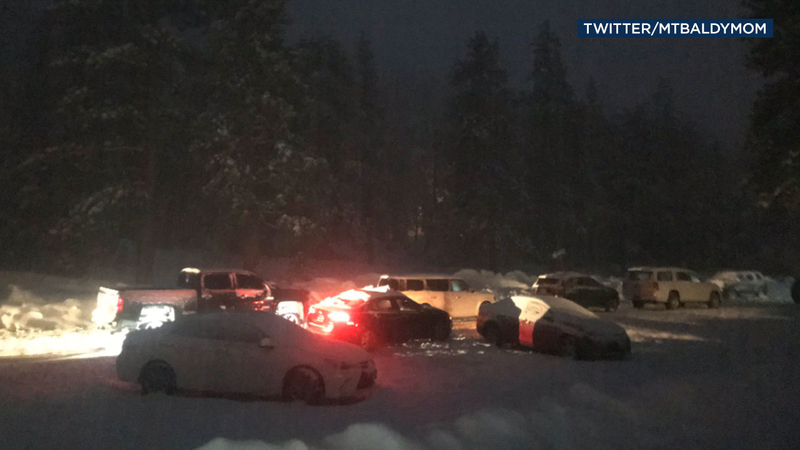 Freezing temps cause hundreds to become stranded on Mount Baldy

The problems apparently began at around 5 p.m. Sunday as people tried to leave the area, but many hadn't brought chains to deal with the slick, snow covered roads.

"Without chains, people were sliding, banging into each other, causing more collisions," one witness said. "Really, really scary. It was just terrible."

Cars were stuck on switchbacks on Mt. Baldy Road. Icy conditions shut down the road just north of Trout Pond.

The California Highway Patrol said there was some sort of mud or rock slide earlier in the afternoon, which blocked the road. Then, as it got colder, folks without chains were having a lot of trouble getting down the mountain.

CHP officers helped drivers get down the mountain safely. As of early Monday morning, authorities said there were about 50 cars still parked along the road because they did not have chains.

There were reports of a few crashes, but there was no word on how severe they were.

Joe Cojean, an employee at nearby Snow Crest Lodge, described a chaotic scene, in which hundreds of people were stranded and confused as many were trying to find a place to stay or just trying to stay warm.

"We got roads closed for like 5, 6 hours, cars stranded, cold," said Cojean. "I got babies, little kids up in cabins right now, and the whole mountain where we are got no water, pipes are frozen, tanks are empty, so I got my people bringing whatever we can."

Terri Kasinga, with Caltrans, said it happens in all the mountain communities after a big storm.

"As we continue to have these storms come in and get this rain and snow, people are going to want to go to the mountains," she said. "It's really simple - here's the deal. It's called following the law. It's the law that you need your chains when you're going up to the mountains during chain control. It's the law that you can't block a lane to play in the snow or to chain up your car. There's designated areas for that."
Report a correction or typo
Related topics:
weathermount baldysouthern californiaicewinterroad safetyroad closuresevere weather
Copyright © 2021 KABC-TV. All Rights Reserved.
More Videos
From CNN Newsource affiliates
TOP STORIES