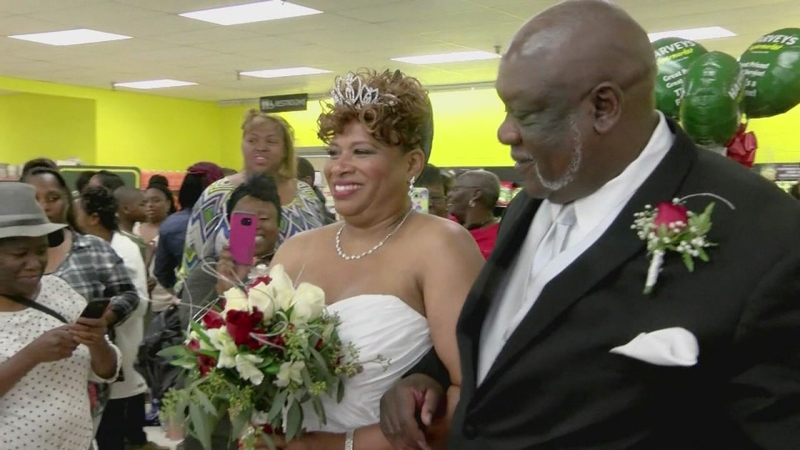 ALBANY, Ga. -- While many were exchanging dishes on Thanksgiving, an Albany couple exchanged vows, but their wedding venue may surprise you.

Four years ago after returning from a tour in Afghanistan, Charles Larry Tinson ran into the Harvey's Supermarket in Albany to pick up a last-minute item for his Thanksgiving dinner.

Larry was searching the aisles for cranberry sauce but little did he know that he would find something else -- his soulmate.

"I heard someone say 'Hey, girl,' and I turned around and said 'Oh my God, Larry? I haven't seen you in over 20-something years," said Mary Tinson.

Mary and Larry had met a few times before that Thanksgiving, but it wasn't until that encounter that the two started dating.

"You can often tell when a man has a crush on you," said Mary.

The couple later decided that it was time to seal the deal. And what better place than where they reunited, so they asked Harvey's to serve as the venue.

"She asked me where are we going to get married and I said at Harvey's, where I met you," said Larry.

The folks at Harvey's were more than happy to help.

"We are extremely excited to be part of this special day," said Ken Wicker, Harvey's V.P. of Operations. "To our knowledge, this is the first time we've ever had a real wedding in one of our supermarkets."

The supermarket assisted Mary and Larry with the planning for several months and helped with the live music and the wedding cake, topped with none other than cranberries.

"On Thanksgiving, I mean, we all have things to be thankful for, and we appreciate them allowing us to be a part of this special moment," said Wicker.

A moment that Mary, Larry and the over 70 witnesses will never forget.

"On Thanksgiving Day, he said what he wanted to do is to give thanks to the Lord for the old going out and the new coming in," said Mary.