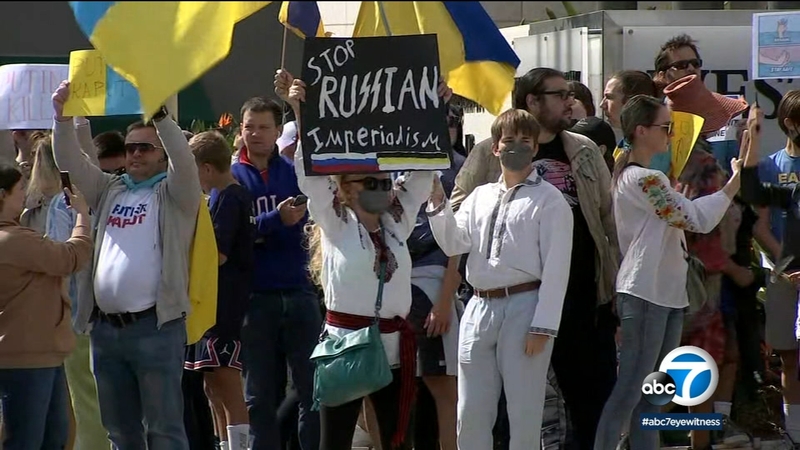 LOS ANGELES (CNS) -- Hundreds of people gathered in the Westwood area of Los Angeles Saturday afternoon to demonstrate their support of Ukraine and demand the U.S. do more to assist the besieged country.

"Today We Are All Ukrainians," read a sign held by a demonstrator during the 1 p.m. action at 11111 Santa Monica Boulevard., near Sepulveda Boulevard, where Sen. Dianne Feinstein has an office. Other signs read: "Stop Russian Imperialism," "Russia Go Home" and "Hands Off! Russia Take a Seat! End This Tyranny!"

Demonstrators could be seen on all four corners of the intersection.

The Ukrainian Culture Center called on the "entire LA community to join Ukrainian-Americans to STOP THE BLOODSHED in Ukraine," in a Facebook post.

"The Ukrainian people are currently under a horrific attack from Russia. We demand that the Biden administration: Immediately provide additional military, financial and humanitarian assistance to Ukraine. Enact additional and more meaningful sanctions on Russia NOW, including blocking any operations of Russian financial and banking institutions using SWIFT (Society for Worldwide Interbank Financial Telecommunication)," the post said.

"Isolate Russia in all possible formats on the world stage. Place an embargo on Russian oil and gas,' the post continued.

There were reports the U.S., European Union and United Kingdom did agree to block selected Russian banks from the SWIFT global financial messaging system, which enables a worldwide network of financial institutions to exchange funds.


Another demonstration took place on Friday in West Hollywood where many Ukrainian Americans gathered to speak out against the Russian invasion of Ukraine. They fear bombs will strike the homes of relatives and friends in Ukraine, and some worry about family members who are joining the battle.

Many in Southern California say it's difficult to be so far away from Ukraine, and see the country they love under attack.

"I was an English teacher there. I lived with a Ukrainian family, I worked with Ukrainian teachers, I taught Ukrainian students," said Abbey Fenberd who opposes the war. "They deserve the right to freedom, and to grow up safe."