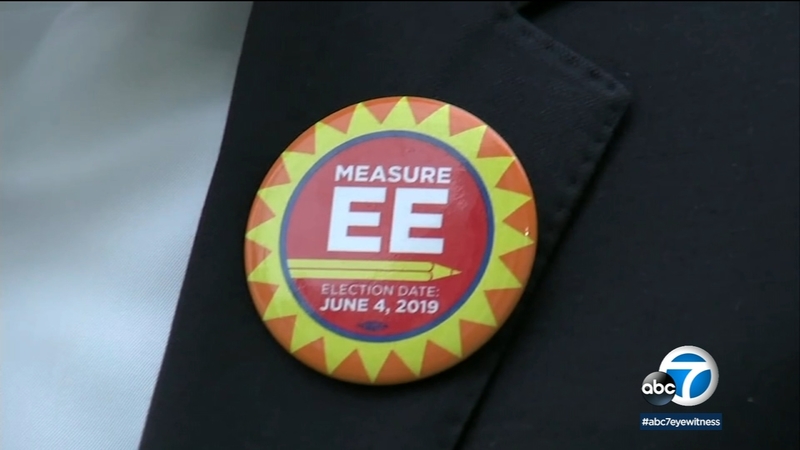 LOS ANGELES (KABC) -- A parcel tax to generate millions of dollars for the Los Angeles Unified School District is far short of the two-thirds majority needed for passage, according to early returns Tuesday night.

"We knew when we started this that this was a heavy lift. Trying to get 66.7% is a heavy lift, but we did not shy away from that," said UTLA President Alex Caputo-Pearl.

Voters in parts of L.A. County decided whether to raise property taxes to help provide more funding for the LAUSD.

"Somebody told me at the beginning of this, isn't this going to be an uphill battle? I remember saying to them, 'You know what, going to an LAUSD school today, ranked 44th out of 50 in the country in funding, that's an uphill battle," said L.A. Mayor Eric Garcetti.

Measure EE would raise property taxes by 16 cents per square foot of indoor space. So the owner of a 1,500 square foot property, for example, would pay about $240 more in taxes per year.
The district said the measure would raise about $500 million a year.

Putting the measure on the ballot was part of the deal reached earlier this year with the teachers union to help end the strike. It would lower class size, add nurses and librarians to schools and hire more teachers.

Opponents attacked the measure over its cost, and note that even renters would likely pay more because property owners would pass along the costs in higher rents.

Those opposed to Measure EE include the Howard Jarvis Taxpayers Association and the Chamber of Commerce.

"Of course they want more money in their pockets, and they really weren't interested in investing in public education and supporting the children of this community, of L.A. Unified School District," said Henry Perez, who supports Measure EE.

Perez has a first grader and a fourth grader in LAUSD. He said his kids' school has a nurse one day a week.

The total turnout figures are not in yet for the special election, but voter participation was expected to be low.