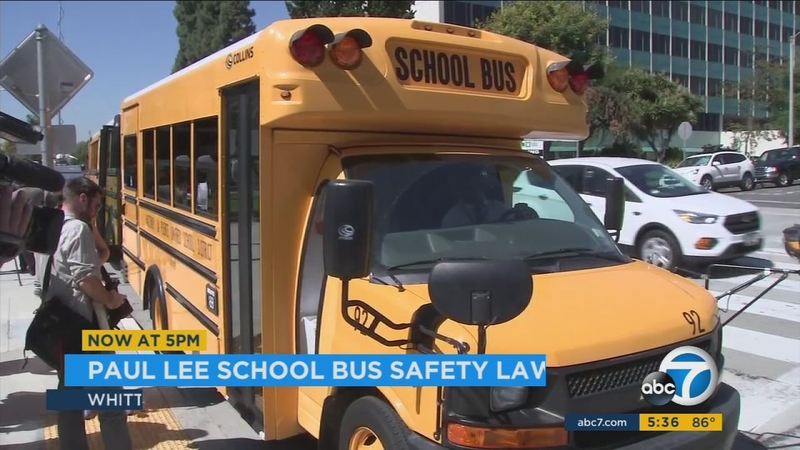 WHITTIER, Calif. (KABC) -- A Whittier couple who lost their 19-year-old son who had autism marked a bittersweet achievement Wednesday.

Last September, their son Paul Joon Lee was found dead aboard a hot school bus. They celebrated his memory with a safety measure in his name that was signed into law by Gov. Jerry Brown.

"I prayed to God, 'God, please the governor sign this bill.' And just as I finish my prayer, and I got the news. He signed it," Lee's mother, Eun Ha Lee, said.

The measure, authored by State Sen. Tony Mendoza, mandates an alarm system for every school bus in California. The alert sounds until the bus driver walks through the bus, checking every row of seats, and hits a button at the rear of the vehicle.

Lee severe autism meant he was unable to speak. His body was found in the center aisle of the bus after being trapped in the hot vehicle. He had been forgotten on board for eight hours after the driver had picked him up at his home.

Mendoza said the systems cost as little as $150 per bus and must be installed by the 2018 school year. The measure includes DMV sanctions for drivers who leave a student on board.

"The department can take appropriate action in disciplining these drivers, either by revocation or suspension of their license," Mendoza said at a news conference outside Whittier City Hall.

The Transportation Co-op told Eyewitness News that the alert systems are now installed on all 134 of its buses.