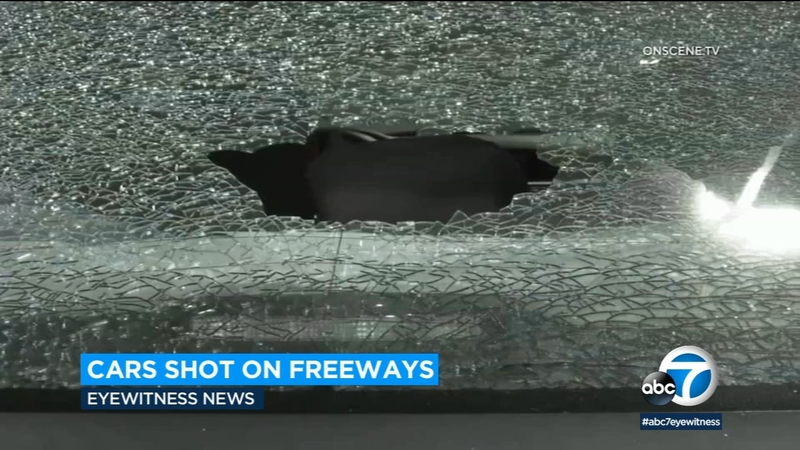 Dozens of car windows shot out on SoCal freeways

RUBIDOUX, Calif. (KABC) -- Authorities were investigating Wednesday a shooting that left the windows of multiple vehicles and a restaurant shattered in Rubidoux.

Riverside County sheriff's deputies responded to the incident outside the Jack in the Box located at 5642 30th St. just before midnight Tuesday.

Four employees of the fast-food chain had their car windows shot, and a window near the entrance of the restaurant was also shot.

No injuries were reported, according to authorities.

As authorities investigate a rash of apparent shootings at vehicles on local freeways, two more incidents were reported Tuesday morning.

Employees told Eyewitness News that a similar incident previously happened at the restaurant.

The shooting comes amid a disturbing trend of apparent vehicle shootings on local freeways. The California Highway Patrol confirmed two additional shootings occurred overnight on the 605 and 91 freeways.

At least 50 such incidents have been recorded on Southern California freeways in recent weeks, including on the 91 Freeway Tuesday. The CHP believes a BB gun was used in many of the cases.

It is unclear what was used in the incident at the Jack in the Box.

"Nobody seen nothing and that's why we're like a little frustrated, because we want somebody to tell us," said Jack in the Box employee Reyna Rangel. "If somebody does know something, please let us know, because these are our car, we work hard. We're trying to make it, you know."

An investigation is ongoing. Authorities say the most useful information that a victim can provide is exact details of the time and location of the incident.