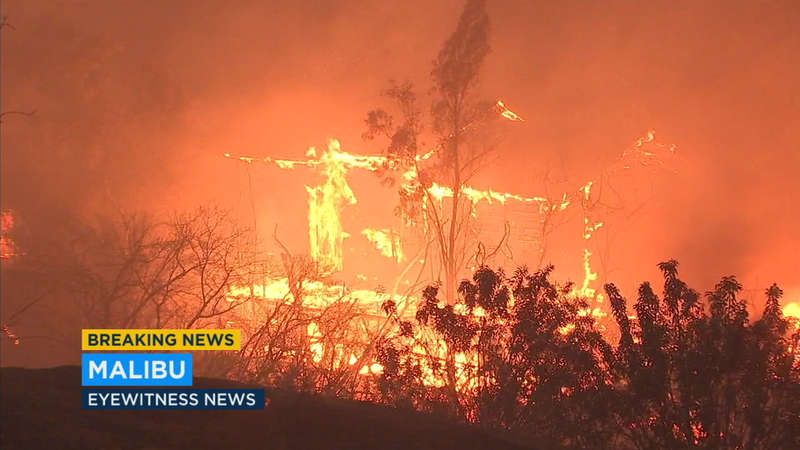 MALIBU, Calif. (KABC) -- The fast-moving and wind-driven Woolsey Fire destroyed dozens of homes - including Caitlyn Jenner's - in Malibu on Friday.

Homes along Kanan Dume Road, Decker Edison Road and Trancas Canyon in Zuma Beach have either been damaged or destroyed.

As the flames of the Woolsey Fire continue to move forward and threaten homes in Malibu.

Other celebrities, such as Kim Kardashian West, Alyssa Milano, Mark Hamill, Cher and Iggy Azalea, tweeted that they'd fled their homes and thanked the firefighters for their valiant efforts.

Fire Fighters, I love you and thank you for doing all that you can to keep us safe!

Horses are finally safe. My children are safe. My home is in jeopardy but... everything with a heartbeat is safe. Thank you all for your concern.

To those who insisted on still being hurtful because our political affiliation is different, you are what is wrong with the country.

Iam genuinely concerned about my home burning down it’s right on the canyon in calabasas and I can’t get home to any of my things right now. 😩🤞

Scott Derrickson, director of Marvel's "Doctor Strange," tweeted that he also lost his home in the wildfire.

We lost our home, but we are all safe and that’s the important thing. Gonna be offline for awhile.

By Friday morning, the entire city of Malibu was under evacuation orders. The chaos has caused major traffic delays on the Pacific Coast Highway, where drivers have spent hours slowly trekking the two-lane highway to get away.

Power has been cut off in many parts of Malibu and it's caused gas pumps not to work, which added to the stress on traffic as people are unable to get gas.

Hundreds of residents in Malibu were stuck in traffic on the Pacific Coast Highway as they fled the intense Woolsey Fire.

The massive blaze, which charred about 14,000 acres, started in Simi Valley Thursday afternoon near the Rocketdyne facility in the Santa Susana Pass.

Late Thursday night, the blaze descended on Oak Park, destroying dozens of homes in its path and then headed into Calabasas and Malibu by early Friday morning.