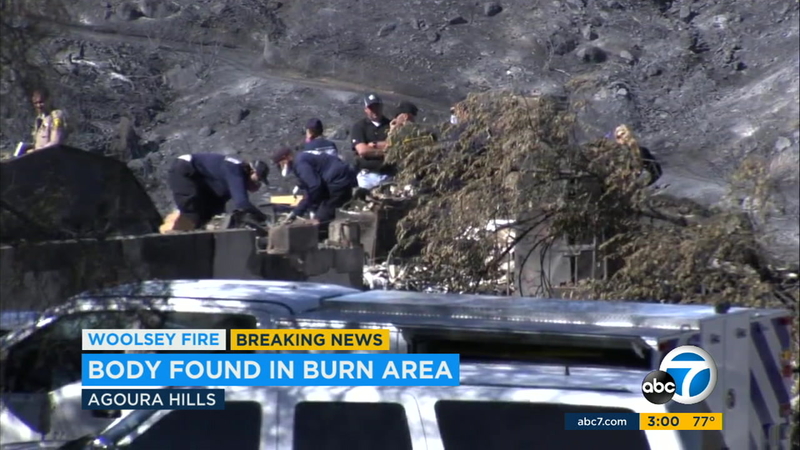 Kanan Road was also shut down in the area and residents were not being allowed to enter neighborhoods because of flareups from a downed power line.

The body was found Tuesday in a remote area that is a 10-minute drive off the main road. The sheriff's department received a request for a welfare check from the person's family. They dispatched a search team including a cadaver dog and found the person's remains in the debris, Sheriff Jim McDonnell said.

Officials have not yet released details on the age, gender or name of the person who was found or the circumstances of his or her death.

But neighbors said a man in his 70s lived at the home by himself. He had suffered more than one stroke recently and had lost his wife.

"It's just tragic," said neighborhood resident Lou Hlavieck. "Nobody wants to lose anything. You don't want to lose property. People have their lives in this. They have their past and their future tied up in this. To lose your life, that's just tragic."

Containment of the massive Woolsey Fire continued to rise Wednesday, despite a stubborn flare-up near Lake Sherwood the previous day.

Before this, the death toll from the Woolsey Fire stood at two - a pair of adults found last week in a car overtaken by flames. They have not been identified.