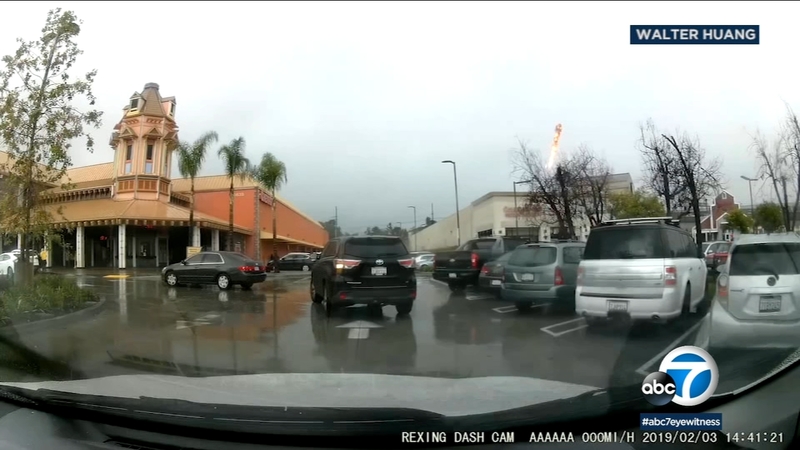 YORBA LINDA, Calif. (KABC) -- Dashcam video shows the moment a twin-engine Cessna 414A bursts into flames in midair before crashing into a Yorba Linda neighborhood.

The footage shows the plane igniting as it falls from the sky, leaving a trail of dark smoke and flames.

The small plane lifted off from Fullerton Municipal Airport shortly after 1:30 p.m. Sunday. Authorities said the pilot flew the 1981 twin-engine Cessna 414A about 10 miles before he encountered some sort of mid-air issue. That's when the plane crashed into a Yorba Linda neighborhood.

Witnesses say the residents of a home set ablaze in the plane crash in Yorba Linda were hosting a Super Bowl party when the aircraft crashed.

Four people were killed inside the house - two men and two women. The man flying the plane also died in the crash. Witnesses said the residents in the house were having a Super Bowl party and said they saw people escaping that home, screaming for family members they couldn't find.

An initial report on the cause of the crash is expected in the next five to 10 days. It may take up to one year to get a full report into the cause of the deadly crash.
Report a correction or typo
Related topics:
yorba lindantsbcaught on cameraplane crashcrash
Copyright © 2022 KABC Television, LLC. All rights reserved.
TOP STORIES
15-month-old is youngest person in LA County to die of COVID
Man who sparked probe into Kobe Bryant crash photos speaks out
Shooting on 5 Freeway in Sylmar leaves driver wounded
Statue honors Kobe Bryant, daughter Gianna at Calabasas crash site
LA City Councilman Mike Bonin says he won't seek reelection
Amy Schneider's historic 'Jeopardy!' run comes to an end
Santa Ana mail carrier surprises boy with cancer with his own truck
Show More
LACMA turns music into art for Interscope Records exhibit
Kaiser to be sued after mom of 3 denied COVID shot dies, lawyer says
Husband who lost wife in crash that killed Kobe Bryant still healing
Student stabbed during fight with another student in Westlake: Police
3 hospitalized after vehicle slams into Los Feliz wine bar
More TOP STORIES News