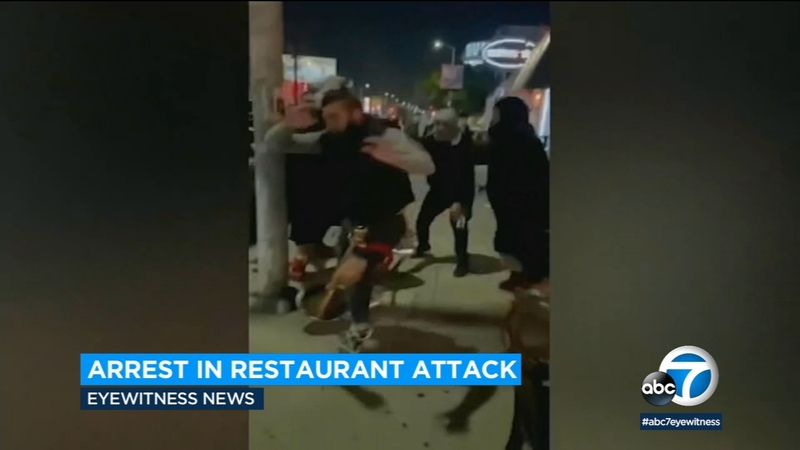 BEVERLY GROVE, LOS ANGELES (KABC) -- A man has been arrested in connection with a violent attack on Jewish diners by an apparent group of pro-Palestinian protesters outside a restaurant in Beverly Grove earlier this week, the Los Angeles Police Department said.

The man was later identified as Xavier Pabon, 30, a resident of Banning. He has been booked for assault with a deadly weapon, according to the Los Angeles Police Department.

The suspect was taken into custody Friday night at a home "outside the city of Los Angeles," the LAPD said in a statement Saturday, adding that Inland Empire teams from the United States Marshal Service taskforce assisted in the arrest.

Police credited the many tips received in the case with helping to identify the suspect.

"He was ultimately tracked down and taken into custody without incident," on the charge of assault with a deadly weapon, the news release said.

The LAPD said it requested his bail be enhanced "due to the crime being motivated by hatred." The case will be presented to the L.A. County district attorney's office and detectives will be seeking additional charges for hate crimes.

According to investigators, the man is one of the primary suspects in the assault and beating of several men who were outside Sushi Fumi in the 300 block of North La Cienega Boulevard just before 10 p.m. Tuesday. Police are still working to identify and arrest the other suspects.

The violent incident, which was captured on video by a bystander, appeared to be an anti-Semitic attack that came amid this month's bloody 11-day war between Israel and Palestinians.

Witnesses told ABC7 that the pro-Palestinian group was yelling anti-Semitic remarks at the diners. Video of the chaotic scene shows several men punching another man on the sidewalk while bystanders shout.

On Wednesday, Mayor Eric Garcetti said on Twitter: "L.A. is a city of belonging, not of hate."

"There is simply no place for anti-Semitism, discrimination, or prejudice of any kind in Los Angeles," Garcetti said. "And we will never tolerate bigotry and violence in our communities."