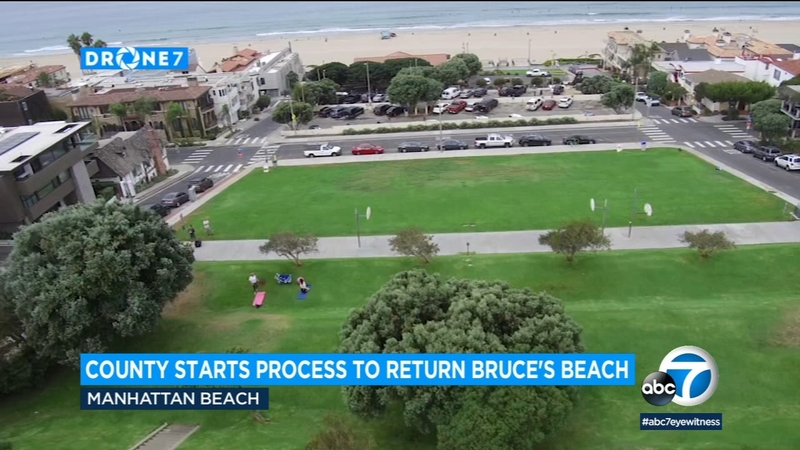 MANHATTAN BEACH, Calif. (KABC) -- Calling it a long-overdue righting of a wrong committed a century ago, County Supervisor Janice Hahn said Friday the county will return a scenic parcel of Manhattan Beach land to the descendants of a Black couple who operated a beach resort that was derided by residents and ultimately condemned and seized by the city.

But transferring the portion of what is known as Bruce's Beach to the descendants of Willa and Charles Bruce requires state legislation to remove restrictions on the land, which now houses the county's lifeguard training center.

Sen. Steve Bradford, D-Gardena, chairman of the Legislative Black Caucus, said he will champion the legislation in Sacramento, saying, "I look forward to working with the county getting this legislation signed into law this year.''

"Sadly, the Bruce story is not unique here in California or across this nation,'' Bradford said.

It was 1912 when Willa and Charles Bruce purchased land for $1,225. They eventually added some other parcels and created a beach resort catering to Black residents, who had few options at the time for enjoying time along the California coast.

The Bruces were undeterred and continued operating their small enclave, but under increasing pressure, the city condemned their property and other surrounding parcels in 1929, seizing it through eminent domain under the pretense of planning to build a city park.

The resort was forced out of business, and the Bruces and other Black families lost their land.

The exact parcel of land the Bruces owned was transferred to the state, and then to the county in 1995. It currently houses the county's Lifeguard Training Center.

"I'm embarrassed to say that I knew very little about this history,'' Hahn said Friday, saying she was well aware of the scourge of racism in other parts of the country, but "somehow I thought that didn't happen here. But in fact it did.''

"And when I realized that the county of Los Angeles now had ownership of the Bruces' original property, I wanted to do what I could to start righting this wrong,'' she said. "I felt there was nothing else to do but to give the property back to the direct descendants Willa and Charles Bruce.''

Fellow county Supervisor Holly Mitchell said the Bruce family was "robbed of their property,'' and insisted that giving the property to back to the family is not a "gift.''

The city park that now sits on a portion of the land seized by the city has borne a variety of names over the years. But it was not until 2006 that the city agreed to rename the park "Bruce's Beach'' in honor of the evicted family. That honor, however, has been derided by critics as a hollow gesture toward the family.

After hours of public comment and debate Tuesday night, the Manhattan Beach City Council adopted a resolution acknowledging and condemning the city's actions of a century ago involving Bruce's Beach. But the resolution did not include an apology to the family. The council did agree to install new historical markers at the site.

A descendant of the Bruce family, Chief Duane Yellowfeather Shepard, lashed out at the council during Friday's announcement, making it clear the family would be pursuing legal action to be fully reimbursed for the seizure of the land, along with restitution for lost earnings from what the resort would have earned over the past century, along with punitive damages for the institutional racism in this city that railroaded our family out of here.''

He praised Hahn for taking action, saying she "realized that injustice, a violation of the human rights of Americans, has occurred.''

Hahn said the county is in discussions with the Bruce family to discuss the future of the land, and the lifeguard training center. She said one possibility is that once the land is returned to the family, the county could then lease it back to house the training center.