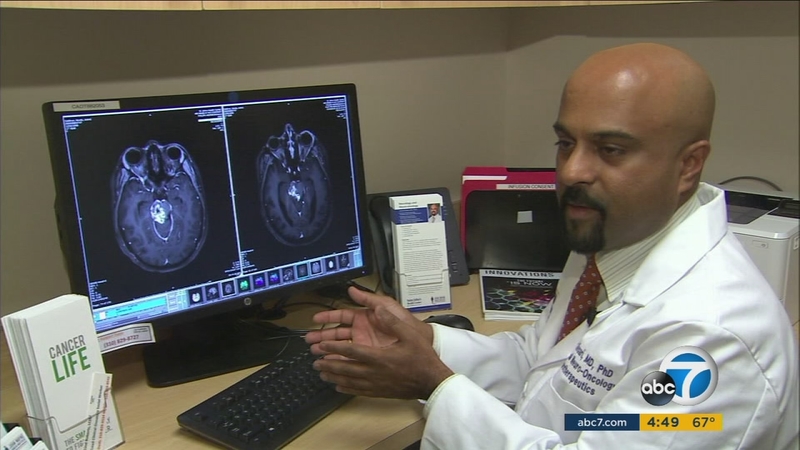 SANTA MONICA, Calif. (KABC) -- A local brain cancer specialist believes more lives could be saved if doctors took a closer look at individual tumors, which is the game-changing approach that saved one teen in Agoura Hills.

The first time 17-year-old Nicole Saldivar knew something was wrong was when she started having vision and balance problems. An optometrist detected something unusual.

"She saw something behind her eyeball," said Alfredo Saldivar, her father. "It was, like, bleeding and stuff so we took her to the hospital right away."

They learned Nicole had a lethal form of brain cancer called Glioblastoma. The average survival for victims with the illness is 15 months.

A year of various treatments, including chemo and radiation, didn't work. Nicole's condition only worsened.

"All the doctor's we saw said there is nothing we can do," said the teen's mother, Kathia Saldivar.

She prayed for a miracle until a magazine showed up at her home.

Nicole's mother said she began reading about the doctor in the magazine and told herself this may be her chance to save her daughter.

Kesari is a pioneer in translation neuro- oncology. The goal is to find therapy that has a higher chance of working on a patient's specific tumor.

"We are treating everyone the same. You know, a patient gets diagnosed, and we are just treating them with radiation and chemo whether it works or not," he said.

Kesari did a genetic profile on Nicole's tumor and found a genetic mutation.

Based on his knowledge of cancer pathways and FDA approved drugs, he knew the drug Everolimus would work on Nicole's tumor, even though it's approved for another type of cancer.