2 dead, including suspect, in shooting at Long Beach bar; police fire at suspect 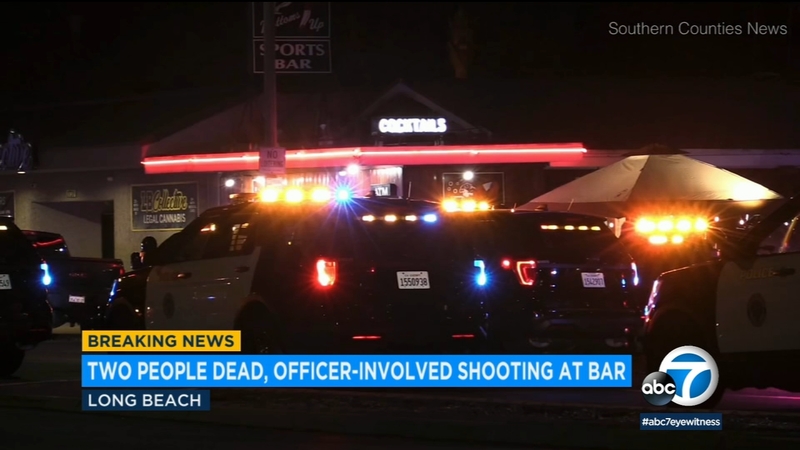 2 dead, including suspect, in shooting at Long Beach bar

LONG BEACH, Calif. (KABC) -- A Long Beach bar employee is being mourned after he was killed during a shooting at his place of work, which also left the suspected shooter dead.

The owner of the Bottoms Up sports bar, Susan Blevin, identified the victim of the Wednesday shooting as 44-year-old Manuel Marquez, a handyman at the bar.

Police said a patrol officer responded to reports of a shooting around 12:20 a.m. at the bar in the 1700 block of Artesia Boulevard.

"When the guy started shooting in the beginning, he was just randomly holding the gun up, shooting at anybody," Blevin said.

She added that's when Marquez jumped into action and helped a bartender get away from the shooter. Marquez was later found dead inside the bar.

"He took the bartender that couldn't jump over the bar and hid underneath, under the sinks, and he pulled her under there," she said.

"I heard, what sounded like to me, as firecrackers. Everybody ran out," one witness, Zach Cortz, said. "I see a guy in the back, he's kicking a backdoor where the kegs are stored. He's kicking it and I see him holding a revolver and I see him shoot in my direction. At that time, I ran out of there."

The lone suspect was still holding the gun in his hand when officers found him dead inside the bar, authorities say. A man who was selling tacos outside the bar was wounded and transported to a hospital with non-life-threatening injuries. The officer involved in the shooting was not injured.

The identity of suspect has not been released but bar employees said he had been at the bar for several hours eating and drinking before he allegedly opened fire. They added there was not any type of altercation before the shooting.

Mike, an off-duty bouncer who lives next door to the bar, said he heard the first round of shots and female bartenders screaming.

"So that's when I started putting on my sweats, and I heard six more shots," he said.

Mike credits the officers' quick response, and the officer who stopped the suspect.

"If it wasn't for him, I think that guy probably would've killed a lot of people," he said.