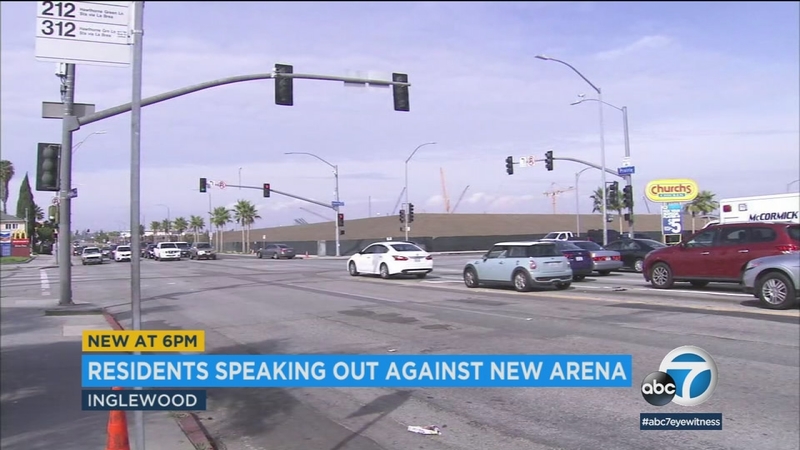 INGLEWOOD, Calif. (KABC) -- Inglewood residents who are against a possible Los Angeles Clippers arena in the neighborhood are making their voices heard.

Opponents of the arena submitted their questions and comments in writing at a public informational meeting on Monday. One big concern is the displacement of families.

The plans include an 18,000 seat arena and a practice facility. The largest portion of the project would be built at the intersection of South Prairie Avenue and Century Boulevard, close to the new pro football stadium and entertainment complex already under construction.

Most of the land at the proposed site of the basketball arena is vacant but there is still some business in the area.

The Clippers' lease at the Staples Center runs through 2024, but team owner Steve Ballmer wants them to have their own arena.

Protesters said they fear neighborhood residents will be displaced and other potential problems could follow.

"These are very real things people are experiencing and to have city officials that don't want to speak to that is really discouraging," Curry said.

Inglewood Mayor James Butts said he is hearing many positive comments about the possibility of a basketball arena.

The owners of the Forum have filed a lawsuit against the mayor and the city of Inglewood, accusing the officials of violating contractual commitments to clear way for construction of a Clippers arena, which would be down the street from the Forum.
Report a correction or typo
Related topics:
sportsinglewoodlos angeles countycaliforniasouthern californialos angeles clippersgentrificationnbahousingdevelopment
Copyright © 2021 KABC-TV. All Rights Reserved.
More Videos
From CNN Newsource affiliates
TOP STORIES