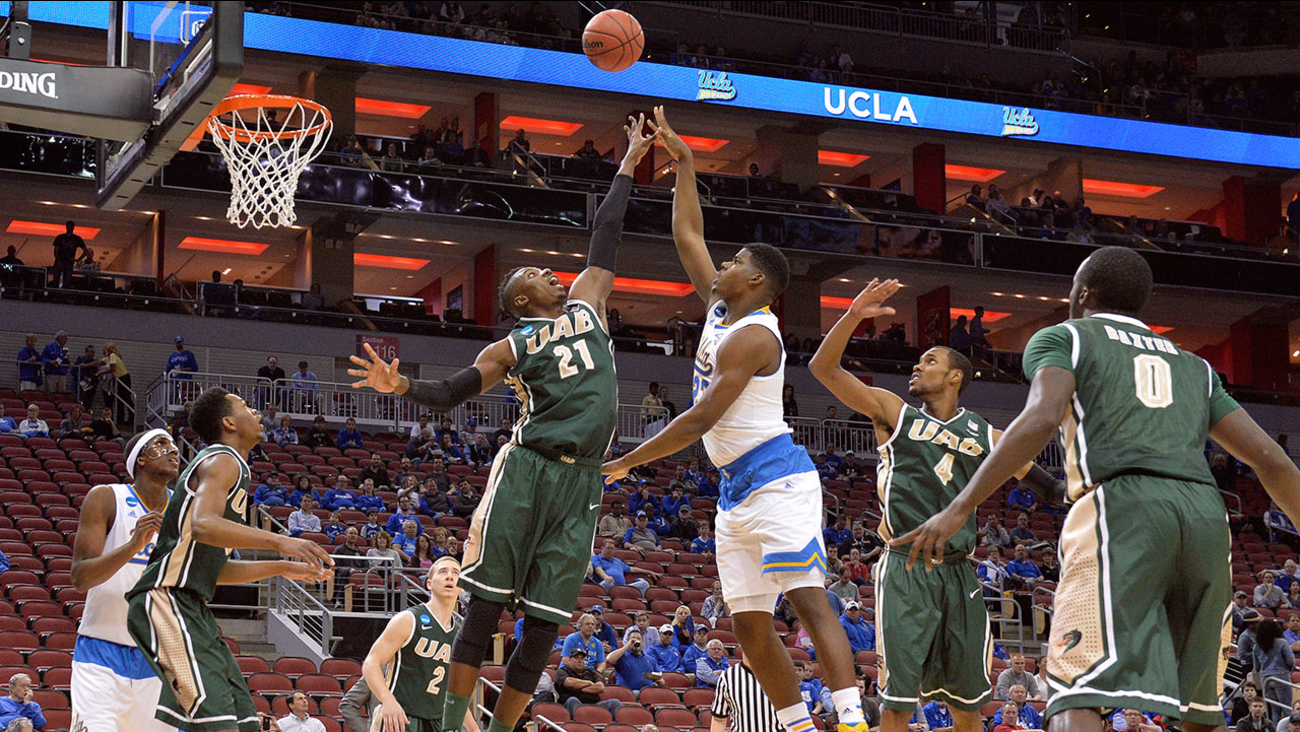 The Bruins (22-13), the team many thought shouldn't have even been in the field of 68, have won six of their last seven games in earning their first consecutive Sweet 16 berths since reaching the Final Four three straight seasons between 2006 and 2008. They will play either Gonzaga or Iowa on Friday in the South Regional semifinal in Houston.

UCLA improved No. 11 seeds to a perfect 5-0 against 14 seeds in the NCAA Tournament, and the Bruins didn't need any questionable calls to win the program's second game as a double-digit seed.

This time, they just dominated inside and shot the ball as well as they have all season.

The Blazers (20-16) missed out on their first regional semifinal since 2004 coming off their big upset of No. 3 seed Iowa State on Thursday. Robert Brown led the Blazers with 25 points and William Lee added 10.

With Parker inside, UCLA outrebounded UAB 41-26 and had an even bigger scoring edge in the paint at 52-22.

These teams came out shooting, and the Blazers didn't back off looking for a second straight upset. They shot 50 percent in the first half and hit six of 10 3-pointers and grabbed their biggest lead at 21-15 on a 3-pointer by Lee. Then the Bruins showed just how well a team can knock down shots, reeling off a 13-2 run to take back the lead.

At one point, UCLA connected on eight straight shots helped by Parker dunking and scoring in close. They took a 46-37 lead after Alford finally hit his first 3 with 17 seconds left. The Bruins came out of the locker room scoring eight of the first 11 points, and Looney scored six straight with his last basket giving UCLA a 54-40 lead not even 3 minutes into the half.

The Blazers kept shooting from outside the arc, and consecutive 3s from Denzell Walls and Tyler Madison got them within 64-58 just before the midpoint of the half. Isaac Hamilton scored six straight for UCLA, the last a layup off a steal by Alford pushing the lead back to double digits. That was as close as the Blazers would get again.

UAB: The Blazers couldn't match the rebounding edge they had against Iowa State with Madison and Tosin Mehinti limited to a combined 13 points in the first half because of foul trouble. They managed only nine rebounds in the first half. ... Their last Sweet 16 berth came in 2004 when the Blazers beat Washington, then No. 1 seed Kentucky to advance.

TIES THAT BAND: The late Gene Bartow left UCLA after going 52-9 with a trip to the 1976 Final Four to start the UAB athletic department. He was the Blazers' head coach for 18 seasons and led them to nine NCAA Tournaments, including a regional semifinal in 1982 - the program's fourth season of existence.

UCLA: Gonzaga or Iowa in Houston on Friday.