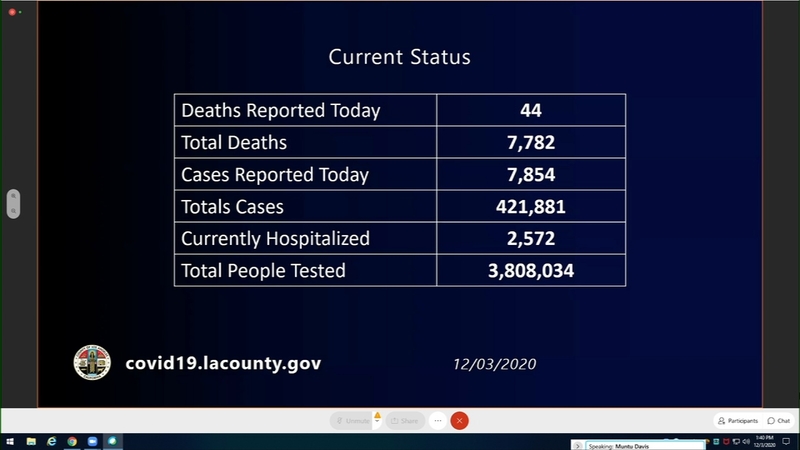 The county reported 7,854 new cases on Thursday - breaking a record that was set earlier in the week - along with 44 additional deaths.

Health officials have warned that based on the county's current transmission rate, the number of daily cases is expected to continue increasing.

Los Angeles County now stands at 421,881 cases since the start of the pandemic.

The county is also reporting an increase in hospitalizations, now at 2,572 as of Thursday.

Previously, the Los Angeles County Sheriff's Department has not generally been focused on enforcing and issuing tickets for violations of the county's COVID-19 protocols. Most of the enforcement of restrictions on restaurants and other businesses has been handled by county health department inspectors.

"Since March we have continued to focus on education and voluntary compliance regarding health orders," Villanueva tweeted. "Moving forward, we will additionally be conducting targeted enforcement on super-spreader events."

He didn't define what type of "super-spreader events" might be targeted. But county officials have in particular warned against large social gatherings involving people from different households. The county's latest safer-at-home orders call for people to not gather at all with others from outside their own household.

There have been multiple instances of people holding large house parties or weddings with dozens or hundreds of people in attendance, many not wearing masks. In several instances, the Los Angeles Police Department responded and shut down the parties and the City Attorney's Office has filed legal actions. The city of Los Angeles also says it may shut off utility service for properties that violate the orders.

Police say about 150 people were at a large party in Sherman Oaks that officers responded to Thursday night -- many not wearing masks amid the pandemic.

Newsom's order announced Thursday would take effect on a region-by-region basis, whenever an area drops below 15% available capacity in hospital intensive care units.
Newsom said that would happen in Southern California within days.

They said the number remains a fluctuating figure and that based on their discussions with the state, "that threshold might be reached at some point early next week," said Dr. Christina Ghaly, director of the county Department of Health Services.

State officials say that Southern California as a whole stands at 20.6% available capacity in ICU. The number is expected to fluctuate on a daily basis.

Los Angeles County continues to see "terrifying increases" in COVID-19 cases along with hospitalizations that are putting a growing strain on the region's health care system, county officials said Wednesday.