Two nights after thinking he was traded, Wilmer Flores puts Mets by Nats 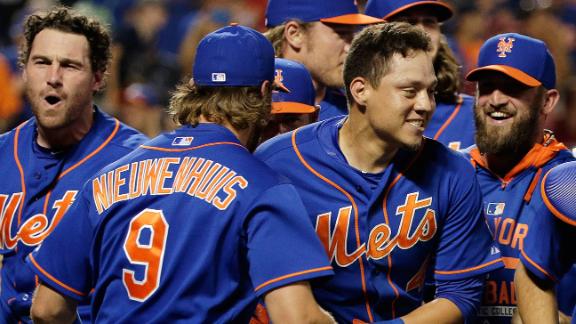 NEW YORK -- Wilmer Flores gave Mets fans one more reason to fall for him -- this time with his bat as well as his heart.

The new favorite at Citi Field hit a leadoff homer in the 12th inning to lift New York over the Washington Nationals 2-1 Friday night in the opener of a pivotal series between the top teams in the NL East.

Two nights after endearing himself to Mets rooters when they saw him wiping tears away at shortstop after he thought he'd been traded, Flores received four standing ovations on an invigorating day for the Mets.

"New York fans get a lot of criticism for being tough. They take a lot of heat for how hard they are on people. What they did for Wilmer Flores, you're not going to find in a lot of places," Mets manager Terry Collins said.

Hours later, Flores drove in both Mets runs and made a spectacular defensive play at second base to back Matt Harvey.

"I'm sitting here looking at some guys who are outstanding writers. Outstanding. You couldn't write that. You guys couldn't come up with that. And you're good. That's unbelievable,'' Collins said.

Flores sent a 1-1 fastball from Felipe Rivero (1-1) to left-center for his 11th home run and first in 147 at-bats since June 12 against Atlanta. Fans jumped out of their seats and roared in a delighted frenzy as Flores pumped his arm and circled the bases, pointing to the word "Mets" across his chest when he came around third.

"Great feeling," said a grinning Flores, who was asked if he'd ever been cheered that way before. "Yeah. Not that loud."

The 23-year-old infielder tossed aside his helmet and was swarmed by teammates who rushed to home plate to celebrate. New York pulled within two games of first-place Washington and washed away the sour taste of Thursday, when the Mets squandered a six-run lead in a gut-wrenching loss to San Diego.

"Words can't really describe what has been going through his head and us as a team the last couple days," Harvey said. "For tonight to happen the way it did, it's pretty unreal.''

Flores has three game-ending RBIs this season. The Mets said that tiesCubsshortstopStarlin Castrofor most in the majors, according to the Elias Sports Bureau.

"Just because the kid showed that players are human beings,'' Collins said, "he's got them now and it's really exciting to see."

Nationals slugger Bryce Harper was ejected in the 11th after taking a called third strike and screaming right in the face of plate umpire Jerry Meals.

"Just sticking up for my team, and myself, at the same time. He was bad all night," Harper said.

Harper, now 0-for-17 against Harvey, had reached base safely in a career-best 26 consecutive games before going hitless in five at-bats. The fourth-year outfielder has been tossed six times in his career, three this season.

"He needs to stay in the baseball game,'' manager Matt Williams said. "We talked about it. We'll talk about it again."

Flores put the Mets ahead in the fourth against Gio Gonzalez with a two-out RBI single off the glove of diving shortstop Ian Desmond.

Yunel Escobar tied it in the eighth with a two-out RBI single on Harvey's final pitch.

An energetic and vocal crowd of 36,164 turned out for the opener of a three-game set, the most significant series in years for the Mets.

"We've got to make up some ground here so we can stay in the hunt,'' Collins said before the game.

Harvey was up to the occasion. He retired his first 16 batters before Jose Lobaton singled in the sixth, prompting a collective groan and then a warm hand from fans who began chanting "Harvey! Harvey!" an inning earlier.

The right-hander, who owns a 0.99 ERA in eight career starts against the Nationals, was backed by a string of exceptional defensive plays. Flores stretched out for a diving stop in the first, earning his initial standing ovation of the night.

"I didn't anticipate that,'' he said.

The other Mets player mentioned in reports Wednesday night of a trade with Milwaukee that ultimately fell through was injured pitcher Zack Wheeler, recovering from Tommy John surgery. General manager Sandy Alderson said he intended to reach out to Wheeler -- but the right-hander called him Friday to express his desire to remain with New York. "Actually had quite an impact,'' Alderson said.

Mets: C Travis d'Arnaud went 0-for-4 with a walk in his return from the disabled list. ... LF Michael Cuddyer (left knee inflammation) is expected to begin playing rehab games in the next few days. "He's feeling a lot better," Collins said. ... LHP Jerry Blevins (broken left forearm) was finally cleared Thursday to begin a throwing program. He was injured April 19. ... LHP Jack Leathersich, who was at Triple-A Las Vegas, had Tommy John surgery Thursday. Leathersich went 0-1 with a 2.31 ERA in 17 games for the Mets this season.