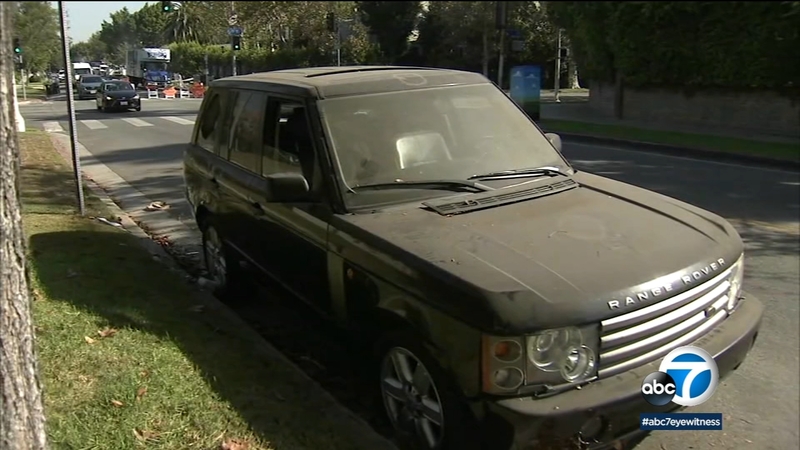 HANCOCK PARK, LOS ANGELES (KABC) -- An abandoned Range Rover has been parked outside Bernie Shine's Hancock Park home for two and a half months. It's been broken into, has the window down and is missing its license plates, but the city won't move it.

Eyewitness News reached out to the mayor's office, who didn't have a specific answer as to why the SUV is still there, but pointed out how the city eased parking restrictions at the beginning of the pandemic with more people home and so many hurting economically.
EMBED More News Videos

The City of Los Angeles is looking the other way on certain parking offenses until at least October.

From April through August 2020, the city only gave 18 citations to abandoned vehicles. During that same period in 2019, 7,447 were handed out. But even with the pandemic, Shine says this Range Rover is a hazard on busy Rossmore Avenue, parked in a tow-away zone.

"I have sent countless emails since Aug. 3 after it was here a month to the mayor's office, to Councilman Ryu's office and countless other people. The mayor has never responded. The mayor's office hasn't even acknowledged my emails. It really is extraordinarily frustrating. I don't know who you have to be in this city to have anyone pay attention," said Shine.

"It should have been towed a long time ago. This shouldn't have been able to happen," said Melissa Perry, who passes the abandoned car on her way to work.

Traffic may not be horrible these days, but as more people head back to work, you might start to notice more backups than you did a couple months ago.

Perry commutes on Rossmore Avenue to go to work and has passed the abandoned vehicle since it first appeared back in early July.

"The fact that nobody did anything about the vehicle, and the person could have been hurt or worse. It was just left here to ultimately be destroyed," said Perry.

The Los Angeles Department of Transportation says the City Council will soon vote on whether to phase back in parking restrictions, fines and the towing of abandoned vehicles starting Oct. 1.