Alex Padilla spends full day laboring with farmworkers, 1st US senator in history to do so 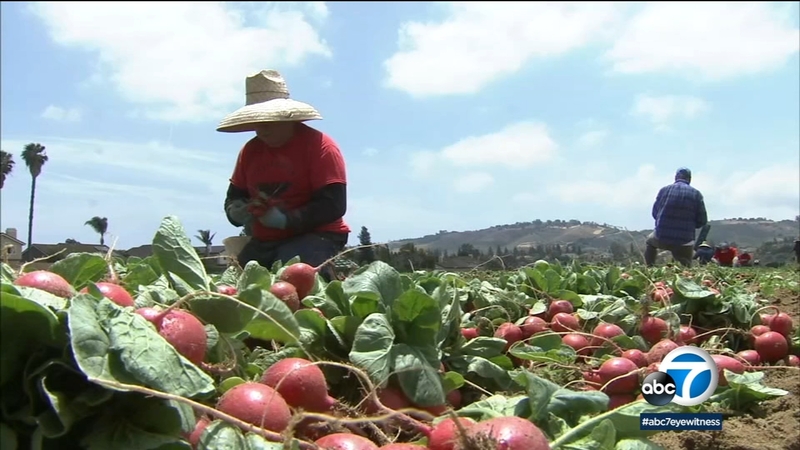 "I've been working with United Farm Workers and other advocates for farmworkers for many, many years, but this will give me the firsthand appreciation for how hard the work is and maybe can make me a better advocate with my colleagues in the Senate," Padilla said.

United Farm Workers said Padilla became the first U.S. senator ever to do so

"I saw how important it was for the workers that a U.S. Senator took the time to come here and work side by side with them," said UFW President Teresa Romero.

The invitation that was made to all U.S. senators as part of the "Take Our Jobs" campaign to garner support in the Senate for a pathway to citizenship for farmworkers.

"They're unsung heroes and deserve a lot better from the government in terms of labor protections, in terms of a pathway to citizenship," said Padilla.

Padillas is the son of Mexican immigrants. His father worked as a short-order cook in Los Angeles and his mother worked cleaning homes.

In the Inland Empire communities of Chino and Ontario, decades ago there was farmland as far as the eye could see. But in recent years, many of those farms have been gobbled up by warehouses and the rapidly expanding logistics industry.

Efren Garcia began his profession as a farmworker more than 40 years ago, at the age of 17.

His wife works at a grocery store and they help provide for his parents in Oaxaca, Mexico.

"The hardest part is not having papers," said Garcia.

Many of his colleagues told Padilla how much they long to visit their aging parents in their home country before they pass away.

"I have held the hands of farmworkers who can't go to the burial of their mother or their father," said Romero.

She said those experiences are far too common.

The physical toll is also significant. Garcia said that gathering radishes is especially challenging, requiring workers to remain on their knees all day.

"It's not too bad today, but they're out here even in you know, 110-degree weather or when it's pouring rain," said Padilla. "The work has to get done. People need to eat, and they do it with joy. But it is hard work,"

UFW said U.S. Senator Cory Booker (D-NJ) has accepted their invitation as well, and the organization urges the rest of the Senate to do the same.

"Because sometimes they forget. They forget that we exist in the field," said Garcia.