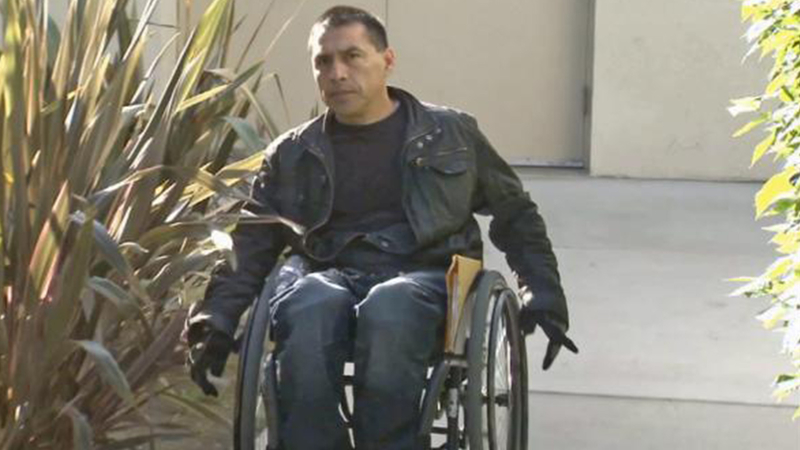 LOS ANGELES (KABC) -- Alfredo Garcia, a notorious serial plaintiff, convicted felon and undocumented immigrant, has been deported to Mexico. Garcia made it his business to sue small businesses, filing more than 800 lawsuits against businesses in the Los Angeles area for alleged violations of the Americans with Disabilities Act.

Garcia hasn't held a job since he fell out of an avocado tree while he was drinking and high on cocaine about 18 years ago. Garcia's back was broken, his spinal cord severed. Since then, he's made a living off these lawsuits. It's incredibly profitable, for Garcia and his longtime attorney Morse Mehrban.

Based on previously disclosed settlements, Eyewitness News can estimate that Garcia has collected approximately $1.2 million from business owners since he began filing lawsuits in 2007.

At the same time, Garcia applies for and receives fee waivers from the courts by claiming he is too poor to pay the court fees associated with the lawsuits. That means taxpayers pick up the tab.

Garcia typically sues small mom-and-pop type businesses, but among his 811 lawsuits, big names like Wal-Mart, Bank of America and Jamba Juice are also included. He's also sued dozens of restaurants, auto-repair shops, a medical clinic where he received rehab, a lawyer who deposed him, the city of Cudahy and dozens of Laundromats.

Garcia and other serial plaintiffs look for A.D.A. violations like a bathroom mirror that's mounted too high on a wall or a disabled parking space that doesn't have the required access aisle. His lawsuits rarely go to trial, and Garcia has testified that he typically collects about $2,000 in settlement money per lawsuit.

"These cases amount to legalized extortion," says attorney Jim Link who has defended dozens of local businesses against Garcia lawsuits.

Link is particularly incensed by the court's failure to force Garcia and other serial plaintiffs to pay their own court fees, which run in the hundreds of dollars per case. Eyewitness News added up all of Garcia's court fees that have been waived over the years. The grand total? $213,502.

"So, there's a huge fraud on the system when it comes to these serial litigants who are making tremendous amounts of money, but not paying the court system that they're using to collect this money."

Eyewitness News has been investigating Alfredo Garcia since 2010. At that point, he'd sued more than 500 businesses, including La Casita Mexicana in Bell. The restaurant owners were able to prove that Garcia had not been at their restaurant on the dates he claimed to have been there. They sued Garcia for abuse of process and eventually collected $5,000 in damages.

That was a rare loss for Garcia, who usually collects hefty settlements without ever seeing the inside of a courtroom. For business owners, it's easier and less expensive to settle the case than to hire an attorney to fight it.

Our earlier stories pointed out that Garcia was receiving fee waivers from the courts, despite his substantial income from these lawsuits. The fee waivers were being rubber-stamped by clerks until the L.A. Superior Court began to hold hearings in late 2011 on Garcia's ability to pay his court fees. In 2012, Garcia was ordered to begin paying half of his court fees. That's when he stopped filing lawsuits for about a year.

But in 2013, Garcia started filing lawsuits again, this time in "limited jurisdiction" where a different group of court personnel would be evaluating his fee waiver applications. In each of the new cases reviewed by Eyewitness News, the fee waiver was granted by a clerk. No more fee waiver hearings have been held in his 190 new lawsuits; Garcia's fees have again been waived 100 percent.

"I think he deceived the court because he certainly didn't tell them he was ordered to pay 50 percent fees when he filed the fee waiver applications," says attorney Jim Link.

A spokesperson for the Los Angeles Superior Court would not answer our questions about why Garcia's court fees were being fully waived once again, saying it would be "inappropriate to respond" because it involves active litigation.

Garcia has a lengthy criminal history. He's been convicted of three felonies, involving drug, weapons and burglary charges. In a 2009 sworn deposition, he admitted to violating his probation by snorting cocaine and smoking pot. He also admitted to being in the U.S. illegally and buying two social security cards off the street. Since then, Garcia has had at least two of those felonies expunged from his criminal record.

In February 2011, Garcia was arrested for immigration violations by officers with the U.S. Immigration and Customs Enforcement's Fugitive Operations Team. Due to his disability, Garcia was released while his case made its way through the immigration courts, including an appeal. He was placed "under intensive supervision" by ICE, but that did not stop him from filing more lawsuits. Since that 2011 arrest, he's filed an additional 300 lawsuits.

Garcia's appeal was dismissed in February and he was deported to Mexico on June 11th.

"In light of his medical condition, ICE spent months working with Mexican consular representatives in advance of Mr. Garcia's removal to ensure he would receive continuing healthcare following his repatriation," said ICE spokesperson Virginia Kice in a statement to Eyewitness News.

So, what happens now to Garcia's 80 ongoing lawsuits against business owners? We wanted to ask Garcia's attorney Morse Mehrban, but he did not return our multiple phone calls and emails.

"What it means for the cases is I think they'll all have to be ultimately dismissed," says attorney Jim Link.

"I don't think he's going to be allowed to come back into the country to testify in those cases and I don't think they'll want to get his testimony on video in each and every case. The cost of that would be outrageous to Mr. Mehrban, and I don't know how he proves his case otherwise."

Eyewitness News reached out to many of the business owners who are still facing pending lawsuits with Alfredo Garcia. In one case, the restaurant owner's attorney immediately noticed Garcia for a deposition. Mehrban quickly dismissed the case.

An Eyewitness News producer called Garcia in Mexico to ask him whether he plans to pursue the pending cases. He cursed at our producer, telling her to "mind your own (expletive) business" and hung up the phone.